In our move towards self-sufficiency, finding a substitute for commercially produced flour is important. Since we are unlikely to be able to grow our own wheat, our source of flour has to be both wild and abundant. Years ago I read about using acorns to make flour, so I got out the old wild foods cookbooks and read all about it.

Generally, cookbooks tended to suggest acorn flour was not worth the effort, making acorns edible was just too time and energy consuming. Having now tried out acorns for making flour, I must say I disagree. I ended up using less time and energy than I anticipated. Anyway, the following is what I did. 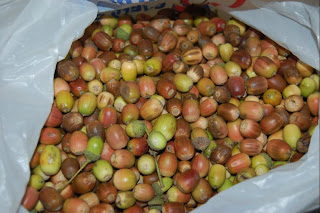 It being autumn, acorns are in abundance (unlike hazel nuts! - see some of my previous posts). They are remarkably easy to gather. There is no climbing up trees or trying to reach out-of-reach branches. The forest floor is where you look for them. And under oak trees, you will find the ground carpetted with acorns. Up here in the North East, the best time to get them is mid October, before the squirrels take the lot and the weather turns them into something unusable. I got a carrier bag full in less than an hour. 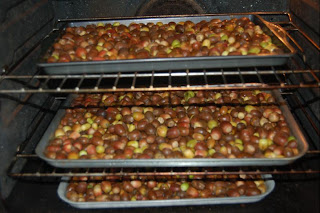 Unlike hazel and beech nuts, acorns cannot be eaten raw. They are full of tanin and therefore very bitter. You could try to eat them raw but you would probably feel horrible sick. So you have to go through a process of roasting and soaking the acorns to get rid of the tanin.
Spread the acorns on baking trays and put them in the oven for about 5 hours at the lowest heat. I roasted them at 60C. 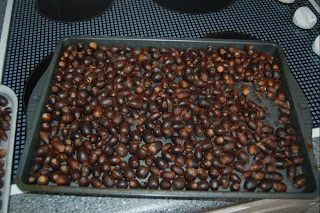 Once roasted, they need to be soaked. Since we were still experimenting, we divided our batch into two. The smaller batch was shelled and then steeped in water. Every day for the next 4 days, the water was changed. The aim was to leech out the tanin and yes, it did seem to work. The water turned a pale brown colour. After 4 days I tried one of the acorns and there was no bitter taste. This surprised me as the recipe books talked of having to do this process for two weeks. 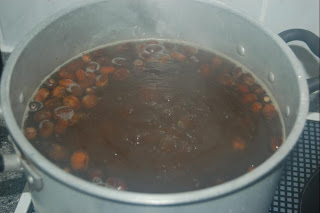 The other, larger batch was steeped unshelled and as with the shelled batch, the water was changed every day for four days. Much less tanin seemed to leech out, judging by the colour of the water. We decided after 4 days to try boiling them. We boiled them for about three hours, changing the water twice. As you can see from the photo, the water quickly turns to a dark brown colour, giving it almost the appearance of tea. 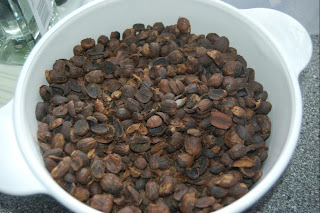 After the boiling process, they were shelled. This is the most time consuming part so I sat down with them and watched a 3 hour film (Schindler's List - one of my favourites) whilst ripping the shells from them. (Don't try this at home if you bite your fingernails!) At this point, the acorns look a bit like coffee beans.

The shelled acorns then need to be dried. We did this by putting them in the oven on baking trains at a low heat (60C) for a couple of hours. 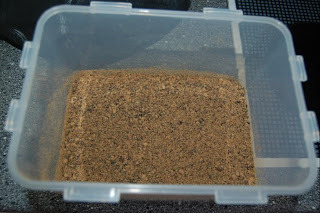 Once they had gone through the drying process, they need to be ground. We put ours through the food blender. I guess that if we had left the acorns in the blender for much longer, we would have got a finer flour. What we got wasn't a super fine powdery flour, but it was good enough.
One final point. I notice a bit of condensation in the container so the flour is still not entirely dried out. So storage will have to be in the fridge and it won't last too long so we will need to use it up reasonably quickly.
My thoughts on making acorn flour are that: 1) it is easier than the cookbooks said; 2) the bitter taste is got rid of much more easily than the cookbooks said; 3) next time, I think we should avoid the initial roasting, boil the lot and then follow the drying process from there.
So, all we have to do now is bake with the flour. But that is for another post.