Picking the last of the potatoes 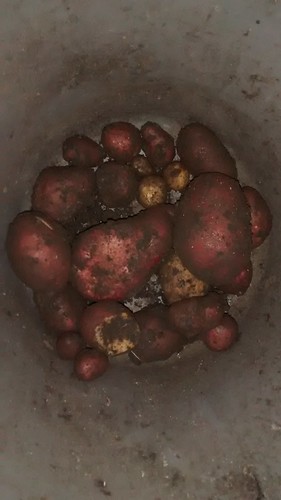 We had a few potato bags still to harvest so recently, we emptied them and gathered in a modest crop of red skinned roosters. Some of them are big enough to be baked. All I will need to do is create some self-sufficient fillings.
Posted by Jonathan Wallace at 12:02 No comments: 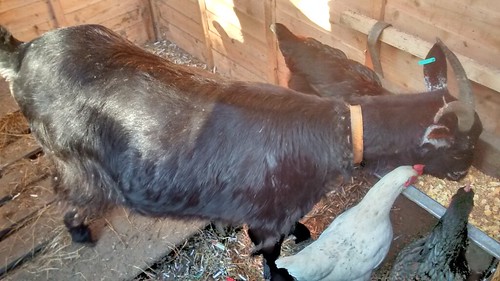 We are reasonably certain that all 3 of our goats are pregnant. Geraldine (photo above) is due first, in late May. Georgina and Pinkie will be due about 10 days later. All 3 are beginning to show. Both Geraldine and Pinkie are experienced mothers. Georgina has not given birth before. We will be having a busy May and June! 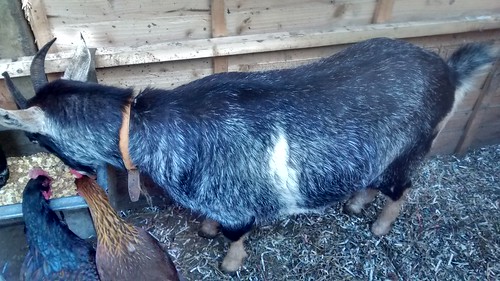 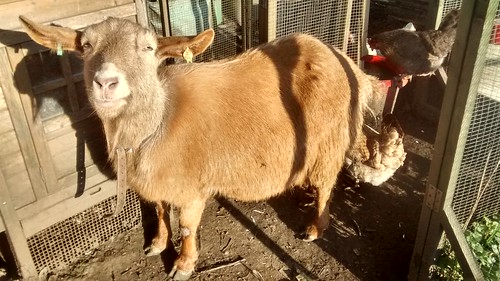 Pinkie
Posted by Jonathan Wallace at 11:52 No comments: 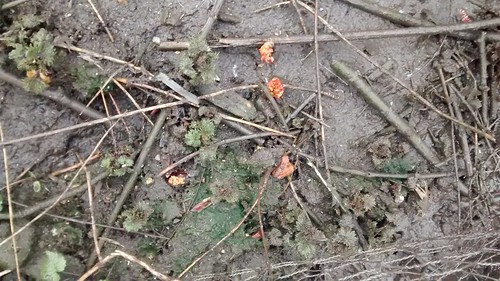 Spring is hurtling towards us now at great speed. All sorts of plants are growing shoots. So it was good to see the first of our rhubarb breaking through the surface of the ground. It is suitably protected from the animals who last year managed to beat us to some of the rhubarb before we had the chance to pick it.
Posted by Jonathan Wallace at 11:34 No comments: 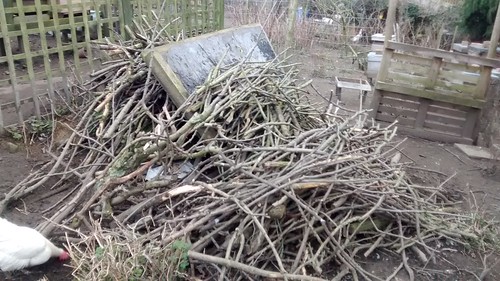 We have lots of branches waiting to be chopped up for fire wood. The were originally growing on hedgerows around the site but we chopped them back as the hedges were enormously overgrown last year. We then fed them to the goats. They ate the leaves, twigs and bark. 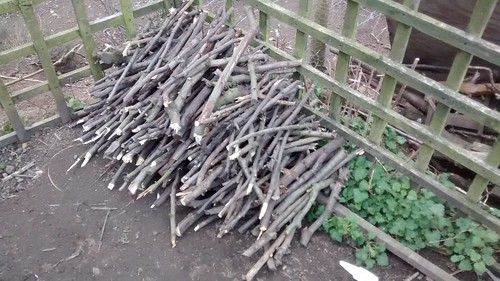 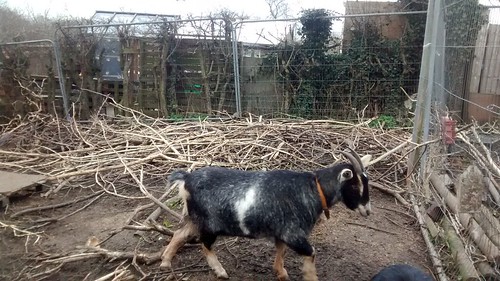 We've been cutting them into lengths of about 30-40cm. We still have plenty more to do.

We have, however, no solid fuel heating system in place yet. We can blame a company called Solarlec for that. They were supposed to install a super-advanced bio-mass boiler for us in October 2014. Despite handing them a deposit of £3300, we were given one excuse after another for the next 5 months. By then we started to threaten legal action. We were then told by Solarlec that the location of the proposed boiler (the garage) was the wrong place to put such a piece of equipment. This was rather odd as they visited us in September 2014 and advised us that the boiler needed to go into the garage. The regional manager therefore offered us a new visit by a technician or our money back. We immediately asked for our money back and it was agreed it would be returned to us within 2 days. Two weeks later I was back on the phone to them asking for my money. I demanded to speak to the highest authority in the company when I called and was put through to one of the directors. The cheque was in my hands the next day. There was never an apology or an explanation as to why we were so thoroughly messed about by them.

Solarlec are promoted by TV personality Kate Humble whose farm was fitted with solar panels by the company. I hope she got better service than we got. All I can say about Solarlec is never do business with them. Find someone else.

Meanwhile, we are soon to start searching for a decent company capable of installing a wood fired boiler and a wood burner for our front room. We now have quite a stock of wood to burn so fuel will not be a problem.
Posted by Jonathan Wallace at 16:55 1 comment: 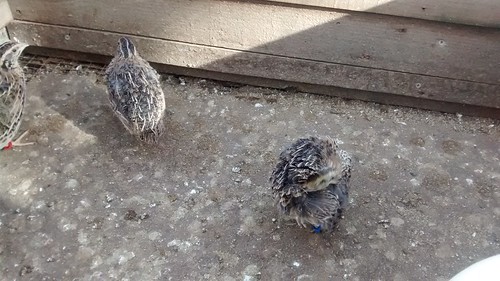 Of the 10 quail chicks that hatched last month, only 4 survived to be taken, last Friday, to the quail house. Sadly, one of these 4 has since died though it had deformed legs and we were not expecting it to reach maturity. The other 3 have fitted in well with the other birds. 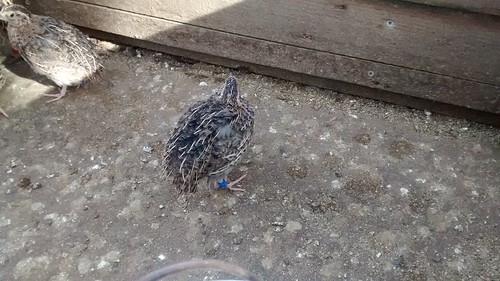 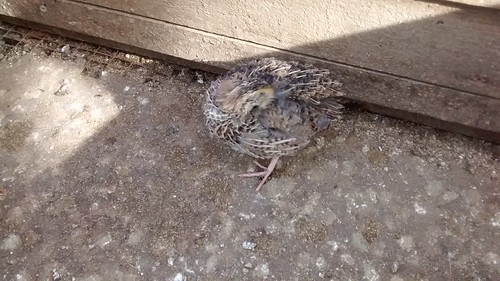 Posted by Jonathan Wallace at 12:35 No comments: 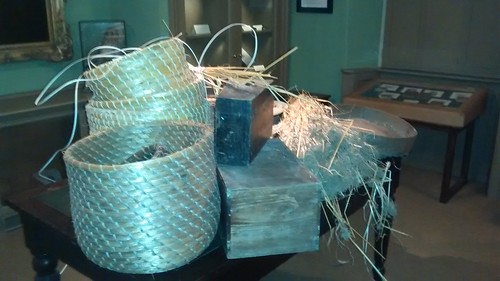 Earlier this month we signed up for a skep-making course in Northumberland. It was not as complicated and challenging as I feared. 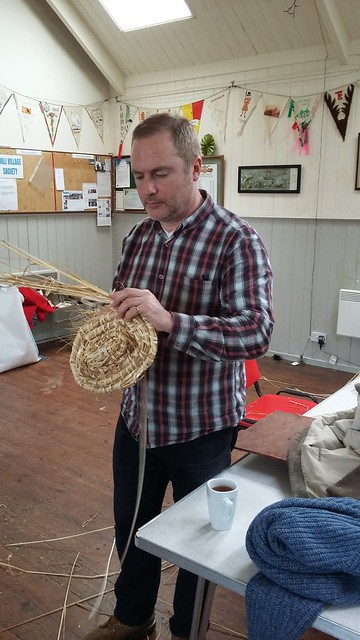 I want to have a go at housing a honey bee colony in a skep to see first hand the challenges those who kept bees hundreds of years ago faced before the invention of the modern beehive. We also have a plan to make small baskets for mini-jam hampers for the Christmas markets.

Obviously the more locally produced materials we use, the better. It is unlikely we can use modern straw as it is too short but we can pick reeds instead. The bindings are made from brambles, of which we have plenty in the area.
Posted by Jonathan Wallace at 15:47 No comments:

Pinkie in the greenhouse 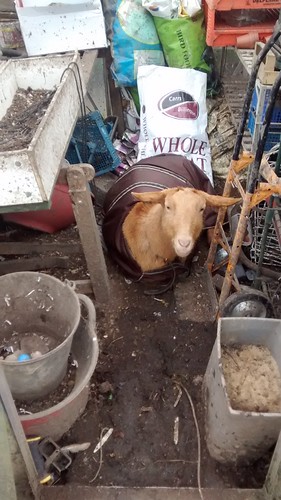 Pinkie has taken a bit of a shine to our greenhouse recently. Though she has her own shed, plus an unused shed to which she has access, she had adopted the greenhouse as her favourite place at the moment. There is currently no door on it so she can come and go as she pleases. She will, however, soon be stopped from going in. The greenhouse will shortly be brought back into use. It will have its annual scrub down and the rubbish in there will also be removed, making way for seed trays and plant pots. The chickens too will not be happy with that. They rather like the greenhouse as a place to shelter when it's raining.
Posted by Jonathan Wallace at 10:47 No comments: