Recovering from our hen setback 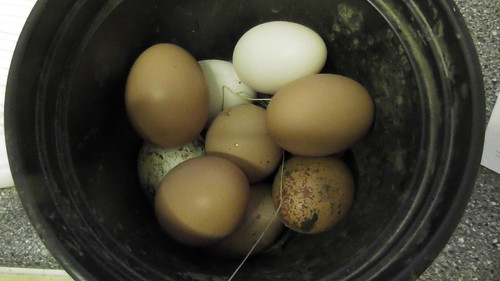 Earlier this month we had a worrying time when 4 of our hens died in the space of two days and three more became ill. All the hens that died had previously been in excellent health and were first class layers. Their loss, from a flock of about 40 birds, many of which are seasonal layers, led to a significant drop in overall egg production.

As the birds had been in fine health previously, and at the point when only two had died, we took the two dead birds and two that were ill to the vet who was unable to identify the cause. The two dead ones were sent off for autopsy which again failed to identify the cause. The report came back showing that the birds' organs had all been in good health. When the next two died, we sent one off to the Animal and Plant Health Agency (APHA) for autopsy. One point we had spotted was that all the affected birds had full crops. And indeed, this turned out to be crucial. APHA explained the cause of death was compacted crops. The birds have access to water but they recommended adding lots of moisture to some of their feed. In a typical afternoon, we give the chickens a mixture of bran and crushed oats. We now feed this to them as a very wet mash.

This has done the trick. No more birds have been lost and the remaining sick birds have fully recovered. And egg production has gone back up again. Today we got 10 eggs, our highest since the autumn.
Posted by Jonathan Wallace at 20:10 No comments: 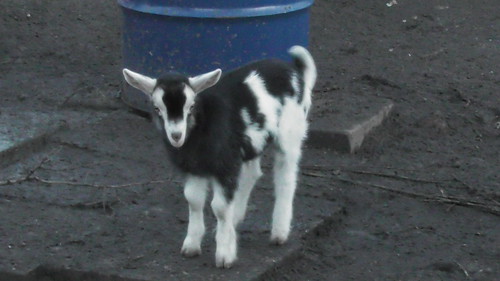 Spot's new baby nanny born on 19th January is doing well. She happily hops about the allotment and is now trying to eat food. She is not being very successful so still totally relies on mum's milk. However, we will start to milk Spot tomorrow. We will takeoff only a small amount from one udder at a time to ensure the baby has plenty (we are not bottle feeding her). This should help to stimulate milk production.
Posted by Jonathan Wallace at 19:35 No comments: 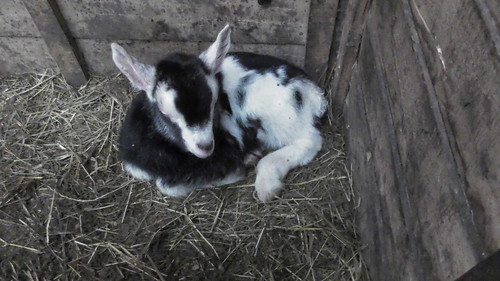 Earlier than expected but today, Spot had here baby, a little black and white girl. Here are the first photos of her. 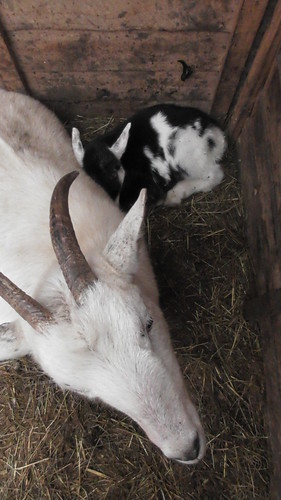 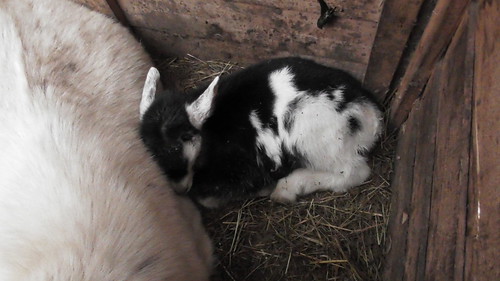 Posted by Jonathan Wallace at 22:36 2 comments: 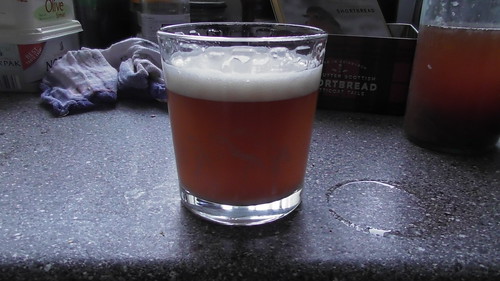 Last autumn I made some plum juice which I bottled and put in the fridge. It is rather pleasant mixed with some of our honey. I forgot about it until earlier this month when I decided to have a glass of it. It seems to have fermented a bit but remains a rather pleasant drink.
Posted by Jonathan Wallace at 12:34 No comments:

On Sunday, Barbara, a beekeeping friend of ours, arrived to help us do our annual varroa treatment of our hives. Varroa is a mite that arrived in the UK in the early 1990s and is now widespread. Sadly, we can't eliminate it. Instead, we have to manage it and contain it wherever possible. Previously we have injected a sugar syrup into the hives which contains oxalic acid. This time, Barbara helped us to fumigate the hives with oxalic acid vapour. We will be checking the varroa boards at the bottom of the hives shortly to see if the treatment has had an effect.
Posted by Jonathan Wallace at 11:29 No comments:

How to stop a cockerel crowing

Of the chicks we hatched last year, two of them are cockerels. One of them, Freddie, a Barnvelder, has started crowing. We are not allowed to keep cockerels on the site unless we can keep them quiet. So we are trying an experiment. We have some cockerel collars. One around the neck of a cockerel stops him filling up with air to belt out a cockerel crow at full blast. We put a collar on Freddie last week. So far, it is working. He crows, but not loudly.
Posted by Jonathan Wallace at 10:38 No comments:

We stumbled across an on-line article recently about someone who feeds Christmas trees to their goats. We had previously had doubts about this as we thought they could be toxic. Given the article suggested this was incorrect, we decided to experiment by giving the goats a Christmas tree that someone had left outside our gate. At first, the goats seemed enthusiastic. And then they gave up though they did enjoy the bark.

The tree will instead be chopped up for firewood with the branches covered in needles dried for kindling.
Posted by Jonathan Wallace at 10:28 No comments:

We still have lots of apples in storage but we need to replenish our stocks to ensure we get through the rest of the winter. The biggest use of apples is for goat food. We get through bucket day. There are still lots of windfall apples out there so last week we took the opportunity to gather a couple of sacks. We will be heading out to get more soon.
Posted by Jonathan Wallace at 10:21 No comments:

We had lots of pheasant, pigeon, partridge, plums, old jam and beer to use up. The result was a couple of game pies. We used hot water crust pastry but with a difference - beer replaced the water.

Excellent results though one of the pies will have to go into the freezer or else we will be fed up with eating the same thing for the next week!
Posted by Jonathan Wallace at 11:12 No comments:

A friend chopped down an ash tree next to his house and we took it away. The main purpose is for firewood but we put the branches into the goat paddock as they love to strip off and eat the bark.
Posted by Jonathan Wallace at 11:08 No comments:

I watched a tv programme recently that had a detailed look at the fashion and clothing industry. I don't buy clothes very often and I have often felt the fashion industry's constant supply of new designs, accessories and clothing - promoted as "must haves" - are damaging to the environment. We are close to the point at which so much of our clothing is disposable - people buy them, wear them a couple of times, decide they are no longer the "latest thing" and then throw them out. The waste of resources is incredible.

So in this video, in response to the programme I watched,  I have a bit of a go at the wasteful way the fashion industry behaves.
Posted by Jonathan Wallace at 11:04 No comments:

How to make beetroot and horseradish relish

This relish recipe is a simple way to use up the surplus beetroot and horseradish we have. The ingredients are: 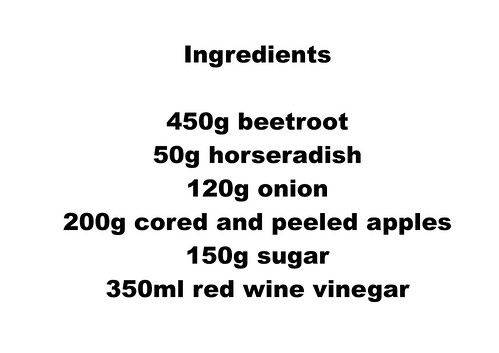 Put all ingredients into a preserving pan, bring to the boil and then simmer until the volume has been reduced by about a quarter to a third.
Posted by Jonathan Wallace at 10:54 No comments: 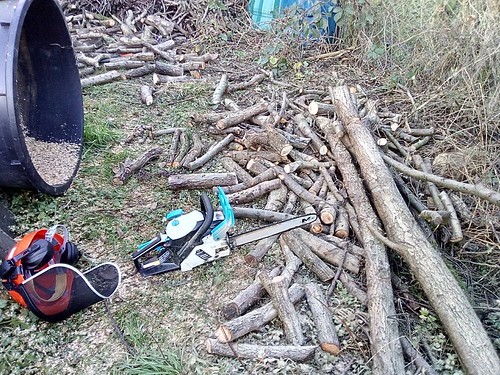 One of my big jobs yesterday was to use the chainsaw to chop up more of the branches and logs we have built up on our farside allotment. They have been drying out for a least 15 months but there is a need to get them chopped and moved to our firewood store back home. The last thing we want is for winter to give us a dose of heavy snow disrupting our fuel supply. We still have plenty of branches waiting to be chopped but progress is being made.
Posted by Jonathan Wallace at 10:55 No comments: 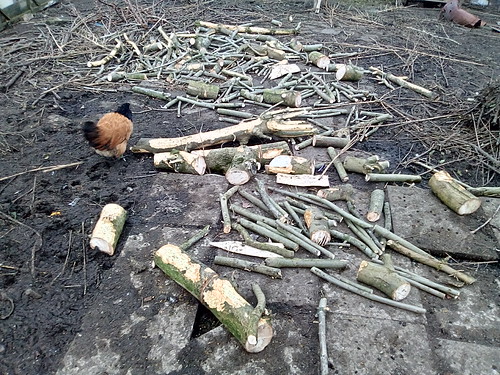 A friend has been taking down an ash tree from beside his house. It is substantial in size so for us it has been a great supply of firewood (for next year). However, before it goes into storage, the branches and logs have been put into the goat paddock where the goats have stripped them of their bark. This is a very nutritious food source for them. They scrape the bark off with their incisors (they have incisors only on their lower jaw). They also eat the twigs. Once stripped and eaten, they will take a rest and chew the cud.
Posted by Jonathan Wallace at 10:48 No comments: 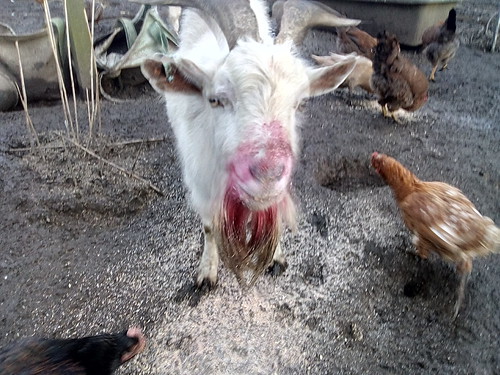 Someone gave our goats some football-sized beetroot recently. Beetroot is one of their favourites! They hollow them out and end up with their faces being stained red. Notice Sunny's red beard above!
Posted by Jonathan Wallace at 10:41 No comments: 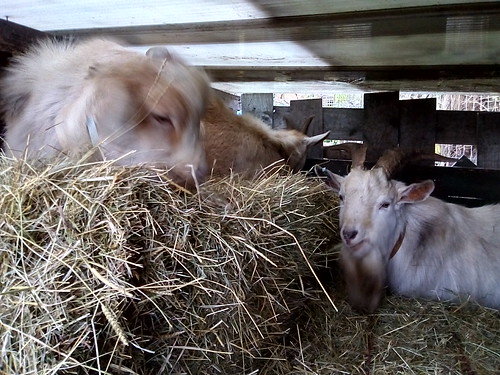 Watch out while going into the hay barn when 8 goats are prowling around. They will mug you to get to the hay, as happened recently! Having invaded the hay barn, it took me some time to get them out of there!
Posted by Jonathan Wallace at 10:38 No comments:

A year of sustainable energy

Though we had our solar panels installed 7 years ago, we only replaced our gas-fired heating system with a wood burning stove a year ago. Nevertheless, our more sustainable energy supply has seen a massive drop in our gas and electricity bills (sadly we are not entirely self-sufficient yet). One of the big projects for this year however is to build an outdoor wood-fired oven. Watch this space.
Posted by Jonathan Wallace at 10:30 No comments:

How to make beetroot and horseradish relish

Yesterday I used up the beetroot we had harvested recently along with some horseradish to make a rather pleasant relish. The ingredients were:


All ingredients went into the pan and were simmered for a couple of hours to reduce volume by up to 30%. Then put the relish into sterilised jars.

Posted by Jonathan Wallace at 10:23 No comments:

The fat from our last pig is an important resource and we put a great deal of effort into extracting it. I first learnt to render fat a few years ago by reading government wartime leaflets advising on how to ensure people got the maximum from their meagre food supplies. In the video above, I show you how to get the fat but the process also gives us a good quantity of gelatine as well.
Posted by Jonathan Wallace at 19:52 No comments:

My highlights of 2018 - something from each month, except January. From goat babies being born during the Beast from the East to the effects of the hot, dry summer; from bee swarms to winning awards for pies. Enjoy!
Posted by Jonathan Wallace at 10:00 No comments: