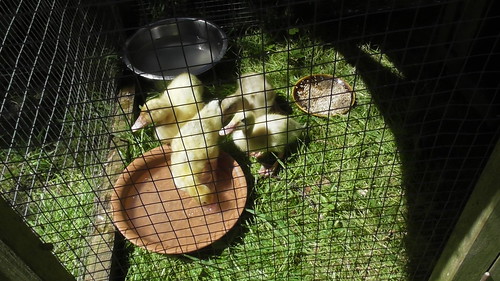 A couple of weeks ago, we hatched 4 ducklings. They have now been moved temporarily to the run in the back garden to acclimatize themselves to being outdoors. They will soon be moved to the chick run on the livestock allotment.
Posted by Jonathan Wallace at 18:17 No comments: 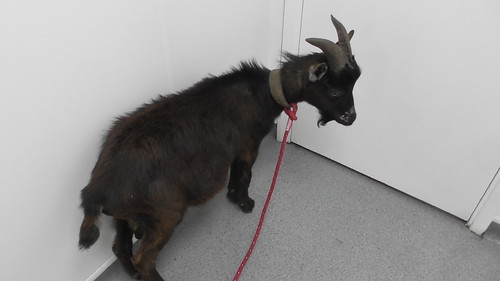 Georgie, our youngest billy, has been hobbling about for a few days. He cannot put any weight on his front left foot. On Thursday we took him to the vet. The conclusion is that he has an infection in one toe. He has been given medication and we will need to take him back in 10 days if he has not recovered.

His appetite remains good, as ever. When he came out of the surgery, he helped trimmed the privet hedge. 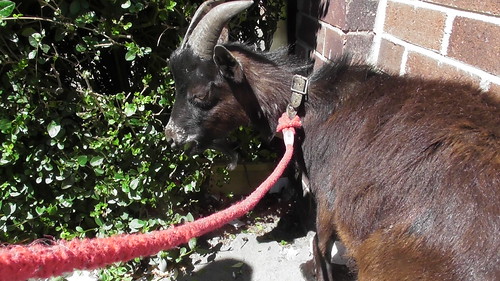 Posted by Jonathan Wallace at 18:14 No comments: 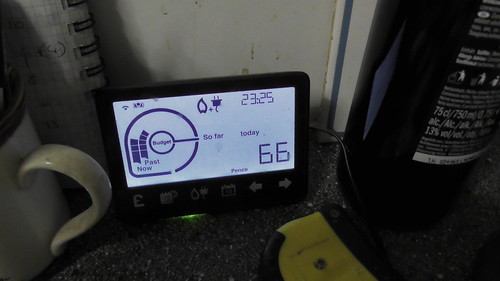 We have been getting an energy boost recently on our solar panels with rechargeable battery back up. The long summer days (at last they are here, somewhat delayed due to the weather) means our panels are generating far more energy than we use, The surplus is stored in the battery and used overnight. Our smart meter is showing just how little energy we are buying in. The other evening, it showed we paid only 66p for the day's energy - but that includes the standing charge of 48p. So we bought in only 18p worth of electricity and gas. We could do with a few more days like that!
Posted by Jonathan Wallace at 18:09 No comments: 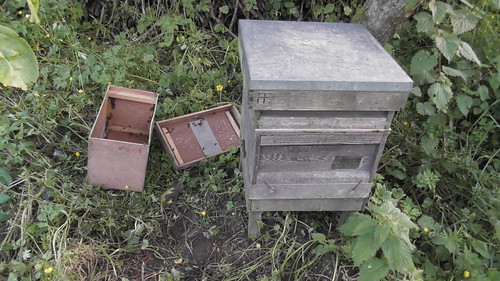 I had to deal with two swarms from our hives over the past two days. We are at the point now where we are having to salvage old hive parts to make hives to house the swarms. We now have 13 but I am not sure one of the swarms I collected is still in the hive. There seemed to be no activity in and out of the entrance this morning. I will check inside soon.
Posted by Jonathan Wallace at 18:04 No comments: 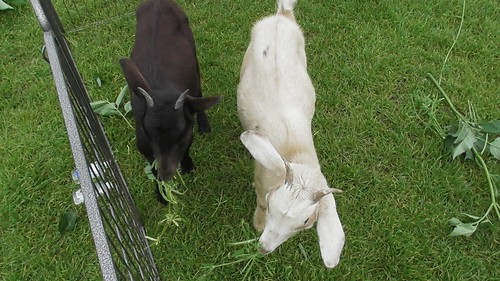 Yesterday we were invited to two local community fairs with some of our goats. We took Danny and Sandy along to Whickham Parochial School in the morning and then to Kells Lane, Gateshead. They were a hit! I think they are now the most photographed animals on the planet!
Posted by Jonathan Wallace at 12:07 No comments: 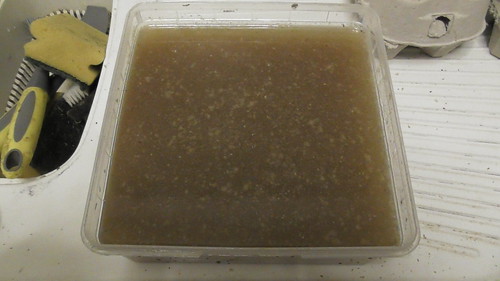 The two pheasant carcasses from Sunday were back in the pan yesterday with the liquid in which they were pot roasted, along with another half litre of homemade beer to be made into stock. It is now back in the freezer but will probably be used this weekend to make soup.
Posted by Jonathan Wallace at 23:34 No comments: 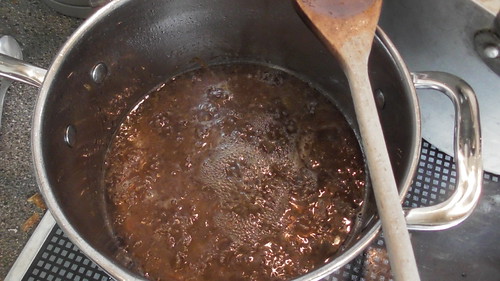 I made 3 jars of grapefruit and lemon marmalade this morning. This is a waste-nothing preserve as it is made from waste. David has a grapefruit most mornings and the skins go into a bag in the freezer. Once there are enough, they are boiled up, along with old lemons that are passed their best. The liquid is then strained and boiled up (with added grated zest), sugar is then added (1kg for each litre of liquid) and then left on a rolling boil until the setting point is reached.

In past generations, the boiled up peel would have been fed to pigs but it is illegal to feed kitchen waste to livestock. It goes into the compost bin instead.
Posted by Jonathan Wallace at 16:43 No comments: 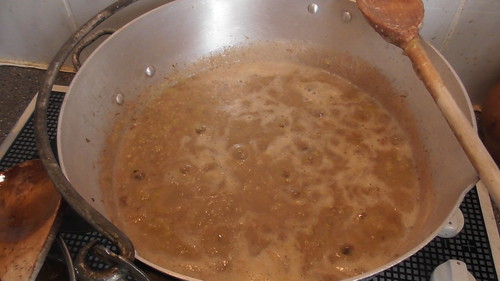 I got round to making the gooseberry and rhubarb jam this morning. 18 jars are now ready for use. Gooseberries are full of pectin so this is a jam that sets easily. I used:


Heat the gooseberries and rhubarb until they have turned to pulp, then add the sugar. Bring back to the boil. Keep checking for the setting point (a dab of jam on a saucer left to cool, if it set, it's time to add to hot sterilised jars.)
Posted by Jonathan Wallace at 16:36 No comments: 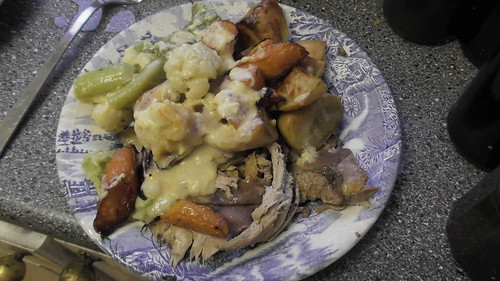 In an attempt to use up some of the contents of our freezers, we had 2 pheasants last night, pot roasted in beer. We made the beer a couple of years ago and it is now flat. We don't want to waste it so this meal gave us the chance to use up some of it.

There are leftovers - the remaining pheasant meat will be used for dinner tonight and the bones will be reboiled in the beer to make stock. The bones will then be dried and made into bonemeal. No waste!
Posted by Jonathan Wallace at 13:21 No comments: 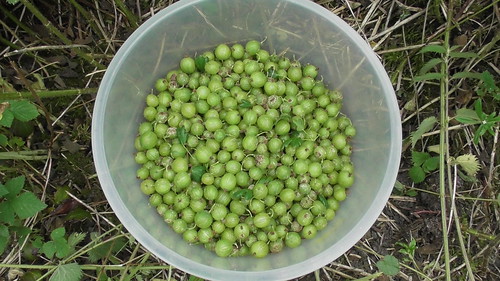 The gooseberry crop is ready for picking. I made a start yesterday when I picked 2kg. They will be used to make jam, along with 2kg of rhubarb from one of our freezers.
Posted by Jonathan Wallace at 13:10 No comments: 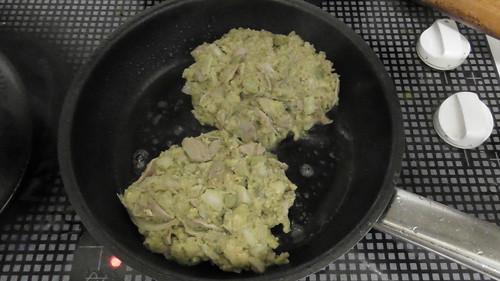 We still have lots of broad beans in the freezer from last year so I made some into burgers last week. The ingredients were:


The quantities of each varies according to what we have available. The eggs help to bind it all together.
Posted by Jonathan Wallace at 11:35 1 comment: 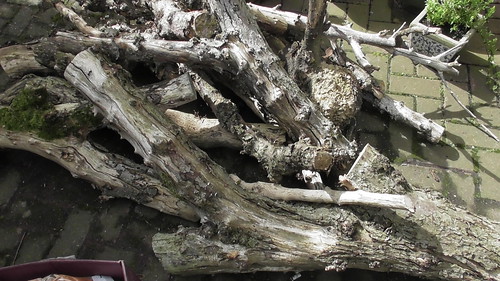 We had a call from a local resident recently. Some time ago they had chopped down a dead apple tree in their garden. Did we want it? I took a look and found that the tree was suitable for chopping and burning as firewood. There is no need to leave it to dry out as it is bone dry throughout. The logs will now be chopped and put into our log store for the autumn and winter.
Posted by Jonathan Wallace at 10:43 No comments: