The bees are still buzzing

I popped over to the allotment to check on the hens this morning. Whilst there I had a quick look at the bees. We had gales and rain yesterday but though it is breezy now, the sun has been out a bit. The bees are making full use of it. They were very busy even though it is nearly the end of November. The mild autumn is having some interesting effects. I am hoping this will keep going. I could do with a mild winter to help with the crops (and the bees).
Posted by Jonathan Wallace at 17:47 5 comments:

How to make apple chutney 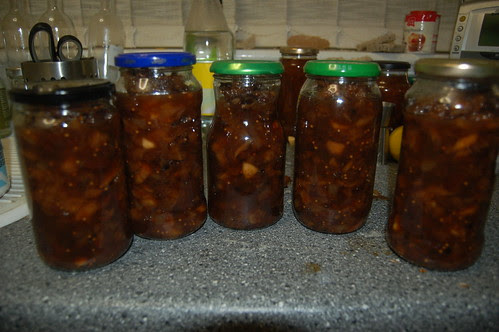 My autumn surplus of apples was gainfully employed to make this chutney, an easy preserve to make.

Put all the ingredients into a preserving pan and bring to the boil. Turn down the heat and simmer for a couple of hours, stirring often. It is ready when it has thickened into the consistency of a thick sauce. Remember to remove the cinnamon sticks.
Posted by Jonathan Wallace at 14:34 No comments:

I really got into making pasties during my two weeks on a wartime diet in August so I am continuing to make them. In this recipe I make corned beef and potato pasties. Very nice!
Posted by Jonathan Wallace at 14:11 1 comment: 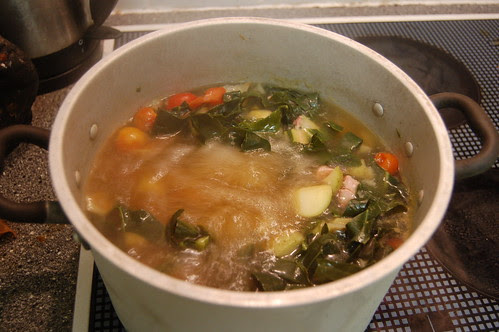 I created this recipe yesterday and almost made it up as I went along. The reason behind it is that I was given a bag of sprout leaves over the weekend to feed to the chickens. These weren't the outer leaves of sprouts but rather the large leaves that grow out of the stem and are normally thrown onto compost heaps when the sprouts are picked. Since my chickens then decided to turn their beaks up at the sight of a few of these leaves, I gave some thought as to whether or not to put them into the compost bin or turn them into a food source for ourselves. They were, after all, in good shape and are perfectly edible. So I came up with the idea of making them into soup.

I used water that had previously been used to boil vegetables. Most people throw this away. Don't do that! Many of the nutrients are boiled out so throwing away the water means you are throwing away some of the best parts of your cooked veg. Into the water I added some chopped potatoes, some tomatoes, a small garlic, chopped sprout leaves, some vegetable stock powder, a couple of rashers of chopped bacon and a large teaspoonful of marmite. This was then boiled until the potatoes were softened.

I then added about 100g of chopped stilton and reheated the soup for a few minutes. Finally, I blended it before serving it. 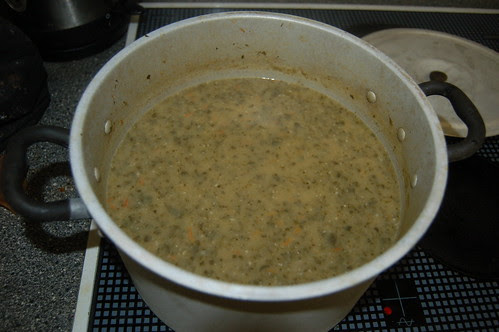 Posted by Jonathan Wallace at 13:51 No comments:

The mild autumn is having an interesting effect on our bees. They have been much more active and have ventured out of the hives to forage much more than is normal for this time of year. Over the past few weeks we have been feeding them sugar syrup but over the last few days, the bees have been quieter, despite the sunny weather we have had today. So we took the opportunity this afternoon to switch them to their winter feed. It was time to give them fondant.

We had bought a 12.5kg block from the supplier we use in Northumberland so we cut it into 3 blocks and placed one in each hive, on top of the frames. We wait to see how long it is before the fondant is eaten but we will make our first check in 2 weeks. We are volunteer beekeepers at Bill Quay Community Farm in Gateshead and recently we fed the bees there. One of the hives got through their fondant in under a month. That's an indication of how hungry these insects can be. But if people take away their honey, they have to eat something.
Posted by Jonathan Wallace at 22:36 No comments: 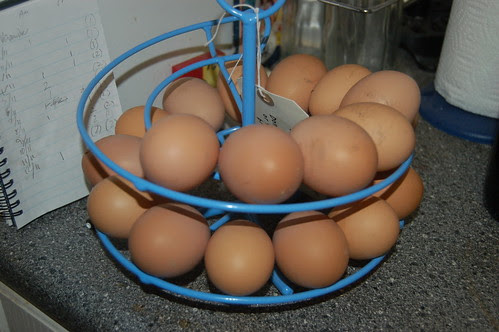 I was in London all of last week and returned home on Saturday evening. And there, waiting for me, was this sight! Lots of eggs laid by 2 of my chickens. The other 4 are still waiting to start their egg-laying career.

I have given half a dozen to a friend who provides us with game (a fair swap). I will be doing more egg cooking soon - and pickling some as well.
Posted by Jonathan Wallace at 16:21 3 comments: 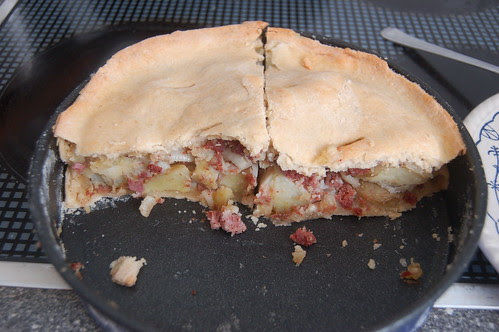 When I spent 2 weeks in the summer on a wartime diet, I acquired a bit of a taste for corned beef which has stayed with me. Okay, so eating corned beef doesn't make me self-sufficient, but the potatoes and onions I put into this pie were grown by us. This pie is made using shortcrust pastry. Quantities of potatoes and corned beef will depend on your taste and outlook. As we are trying to be self-sufficient as possible, we took a leaf out of our wartime cookbooks and used more potatoes than corned beef. One medium sized onion, chopped, went into it as well. Took about 20-25 minutes in the oven at 180C.
Posted by Jonathan Wallace at 16:09 No comments: 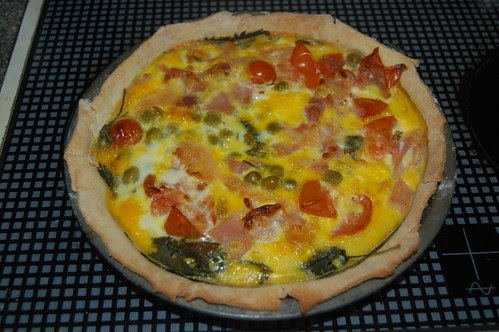 Having picked some nettle leaves recently (the result of our mild autumn making many plants think it is spring) I made this nettle and bacon flan. I used short crust pastry, and into the flan case I put the nettle leaves along with some peas and chopped onions from the allotment and some pieces of bacon. Over them I poured 4 beaten eggs. The recipe is a useful way to use up some of the eggs our hens are now laying.

The flan then went into the oven for 20 minutes. Can be eaten hot or cold.
Posted by Jonathan Wallace at 16:27 1 comment:

The mild spell continues into November so we have been making nettle flans using new growth on nettle plants which seem to think it is now spring. The eggs used are from our own chickens.
Posted by Jonathan Wallace at 18:37 No comments:

How to make sloe jelly

Sloes are not just used to make sloe gin. I use them to make a jelly, combining them with some of the apples I picked at the end of the summer. This is a very pleasant, modestly tart jelly but is easy to make.
Posted by Jonathan Wallace at 19:05 No comments: