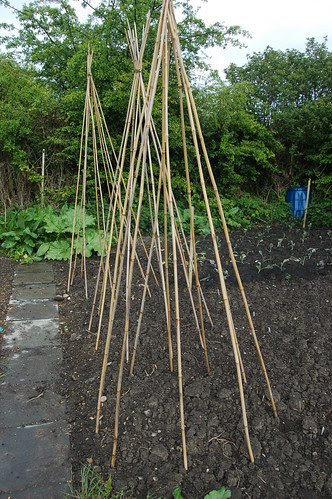 The photo above was taken about 3 weeks ago. We have 3 runner bean wigwams on bed 2, though not on the same part of the bed as they were last year.

We have 3 varieties planted: Galaxy, Scarlet Emporer and an unknown variety from David's uncle and aunt that grew very well last year (better than any other runner bean!).

Since the photo was taken, the beans have been growing and some are now around 5-6cm tall.
Posted by Jonathan Wallace at 00:14 No comments:

Cabbages and cauliflowers under netting 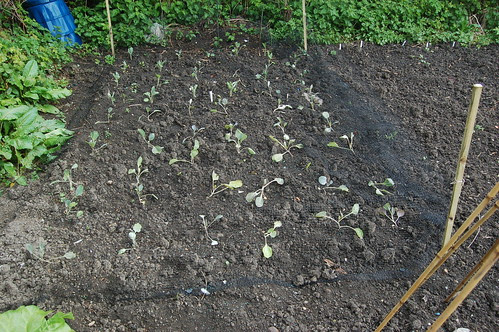 The rabbits has a fantastic meal out on our winter cabbages in January. And what they didn't get, the slugs and snails did. With the entire crop having succumbed to these little critters, we planted summer cabbage and cauliflowers in bed 2. We grew them from seed in the greenhouse and David planted them out three weeks ago. This time, cabbage-munching bunnies can't get at them. We had some netting left over from the fruit cage and this now covers the cabbage patch.

There has, however, been one awful consequence. I found a dead bullfinch under the netting. It must have got trapped there.

The above photo was taken about 2 weeks ago. The seedlings look a bit sickly. However, I'm pleased to say that they are coming on well.
Posted by Jonathan Wallace at 22:54 No comments: 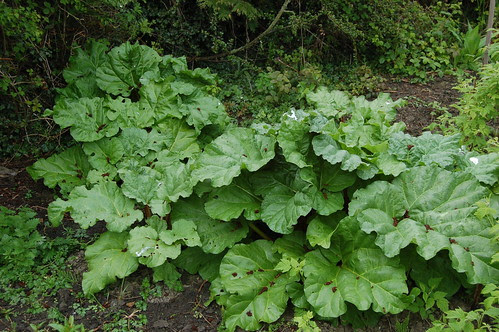 We are heading for a bumper crop of rhubarb this year. It has become something of a tradition in our household now to make rhubarb and ginger jam every May and June. This year will be no different. I'll also make some rhubarb chutney and of course, pies and crumbles.
Posted by Jonathan Wallace at 22:22 2 comments:

Getting excited about sweetcorn

They say simple things please simple minds. For some reason we have been getting very excited about our sweetcorn. As each visit to the greenhouse goes by, it seems another sweetcorn or two has sprouted. We now have 24 growing. There are still more to sprout.

Last year we grew sweetcorn for the first time. We got a modest crop though we left some of it too long before picking it. The mice had a fantastic meal of the best cobs!

When they have grown sufficiently in the greenhouse, they will be planted out on bed 3, next to the fruit cage.

Posted by Jonathan Wallace at 18:11 No comments:

How to pluck and gut a pheasant

This video is a bit late. I shot it in January but since then I've been rather tied up on my business and my involvement in the general election campaign. However, here it is. I had to learn last year how to pluck and gut pheasants and ducks after being given some by a friend who goes shooting. 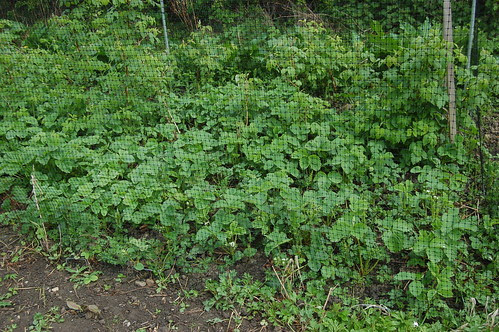 I took this photo a couple of days ago of the strawberries in the fruit cage. They are spreading rapidy and much of the ground in the fruitcage is now covered by strawberry plants. Indeed, some have spread under the netting to grow outside the fruitcage. We are happy to let them spread for the time being but we will need to start managing them soon

One of my plans this year is to use the flat roof of our garage as a growing space for plants such as strawberries, nasturtiums and courgettes which spread over the ground. The roof garden plan may need to be brought forward.
Posted by Jonathan Wallace at 10:33 No comments:

Clearing the derelict part of the allotment

When we took on the allotment 3 years ago, it was entirely derelict. It had been out of use for at least a decade and had suffered from a small amount of flytipping. A large, brick greenhouse had occupied the centre of the allotment but had been demolished and the rubble left lying on the allotment.

Over the past three years we had brought two thirds of the allotment into cultivation. The remaining third has, over the past few weeks now been cleared. We cheated and got someone in to do it for us. The result is a much bigger plot than we expected (showing how overgrown it had become) so it is about 40% of the allotment. In addition we have large piles of rubbish and rubble that need to be removed. Our incinerator was used on Saturday to get rid of some of the wood and brambles but frankly it barely scratched the surface.

I walked around the cleared site this morning and thought about possible uses. I'm still wanting to get chickens so it could be a good locaiton for a chicken run. There will be plenty of space left over for crops. 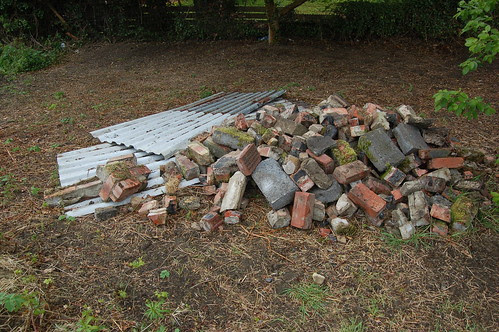 The bricks were from the demolished greenhouse. We are not sure what the corrugated iron was from but we will probably keep it to set up another rainwater collecting system. We collect rainwater in butts from the greenhouse roof but this is not enough for our needs. We have no mains supply on the allotment either. 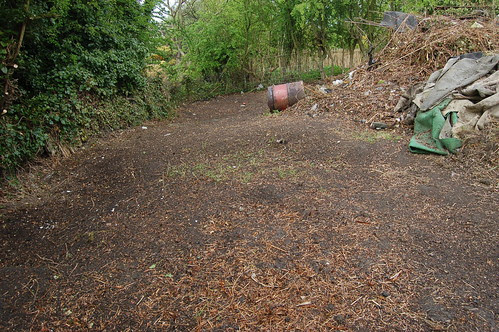 This photo gives some idea of the size of the newly cleared space. 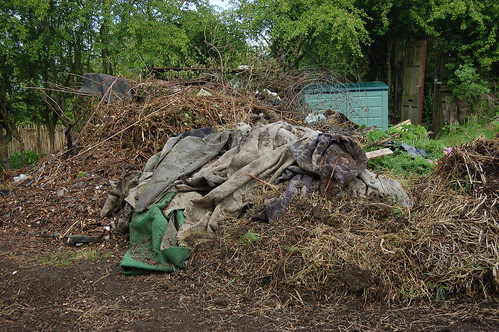 And this one shows some of the rubbish we need to dispose of.
Posted by Jonathan Wallace at 11:39 No comments:

My presence on the allotment has increased a bit recently as I get back into the swing of self-sufficiency following the major disctraction of the past month that limited my chances to grow and secure my food supply. Yesterday was spent weeding the lavender bed on bed 4. Okay, so it's not food but lavender are great for attracting bees and other pollinating insects to the allotment.

Bed 4 is about to have some radical work. The raised bed has been constructed and I poured into it bags of old compost that were used for growing potatoes last year. We also need to add more and therefore have something of a compost shortage at the moment.

Bed 4 is also going to be the location for the pond we are planning to dig. There are frogs in the area but we want more of them to eat the bugs. Here's to hoping that in the spring next year, the pond will be a neat little breeding centre for them. Getting the pond dug and established now will give them a good lead in time.

Meanwhile, Kev has done an incredible job at removing the undergrowth on the disused part of the allotment. It looks even bigger than I ever anticipated. Lots of space but lots of work to bring it into cultivation.
Posted by Jonathan Wallace at 16:35 No comments:

A bit delayed caused by other events (in other words my involvement in the recent UK democratic process!) but here is April's video update. We'll be filming the May update soon.

Posted by Jonathan Wallace at 16:31 No comments:

Even if nothing else grows weeds seem to and a lot of time recently has been spent digging and weeding.

The fruitcage has been repaired and the surprise was how strong and heavy the snow must have been to bend the metal tubes that make up the cage. It took a lot of effort to straighten them.

Broad and runner beans have been planted. Three wigwams for the runners for three different varieties - Galaxy, Scarlet Emporer and an unknown variety from David's uncle and aunt that grew very well last year.

Seeds planted earlier in the year are growing well - the courgettes in particular which have come on from seeds to small plants very quickly. Planted this weekend were Swiss Chard seeds outside together with cabbage and cauliflower plants that had been grown from seed. Also sweetcorn has been planted in pots in the greenhouse.

Kev (the person clearing the abandoned part of the allotment) is doing a great job and soon we will have a bonfire and then start digging it over.

Posted by Jonathan Wallace at 17:43 No comments: