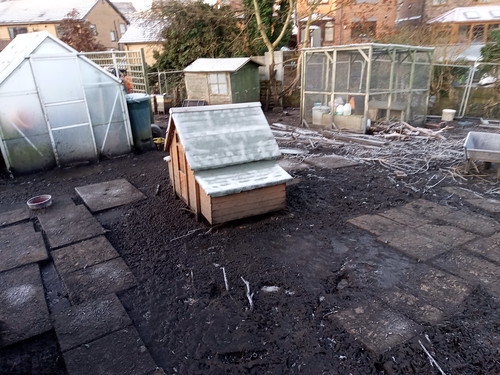 We had our coldest night of the season last night (and it look like it will be worse tonight). It took sometime to thaw out padlocks (in my hands) and break the ice that was stopping henhouse doors from opening! It will be interesting to see how things are tomorrow morning but at least the animals have a hard surface to walk on, a pleasant change from the mud of the past month. 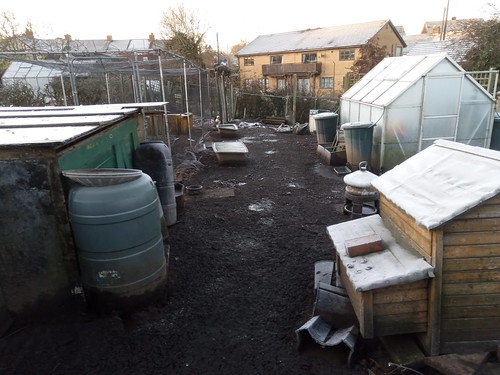 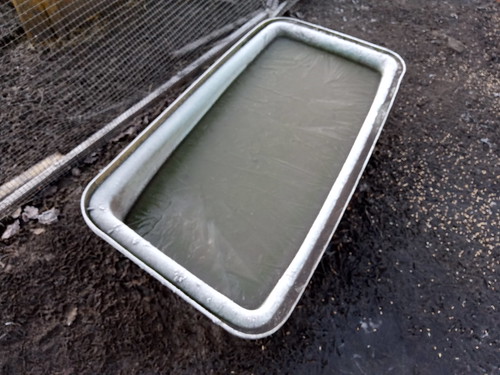 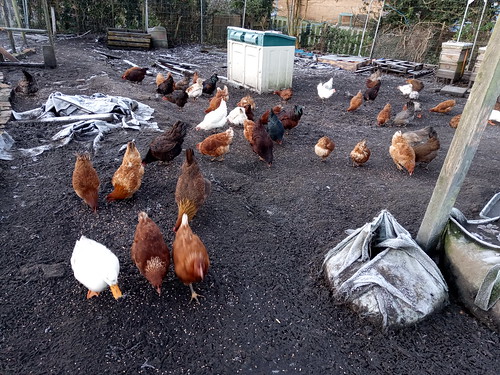 Posted by Jonathan Wallace at 19:35 No comments: 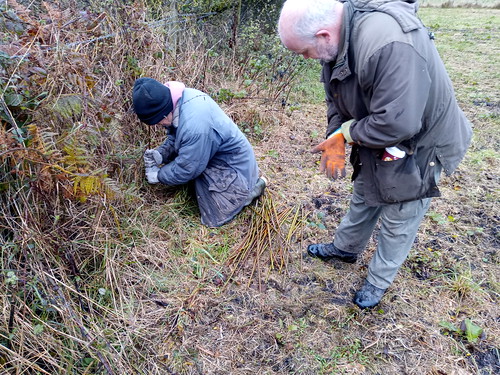 A friend gave us about 30 willow stalks earlier this month. There are some gaps in the hedge on the south side of the small holding so we planted them there. The ground close to some of the gaps is quite wet at the moment due to the recent heavy rains but in future, the willow will be useful for soaking up the excess water. The exercise conjured up thoughts of basket making in the future. It could be a useful skill to learn!
Posted by Jonathan Wallace at 18:32 No comments:

Another slightly late video but this one is from September - we head to the Bowes Show and unexpectedly won  some prizes, more jam is made and the quail house floor needs cementing.
Posted by Jonathan Wallace at 18:27 No comments:

This is a bit late as I've been so busy recently but here is the August video edition of Self-Sufficient in Suburbia. We start the month with the birth of a new baby goat, and spend much of the rest of the month making preserves!
Posted by Jonathan Wallace at 23:29 No comments:

Taking the goats to the small holding 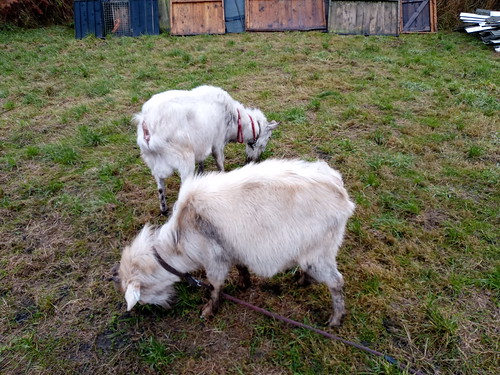 For the first time we took some of the goats to the small holding this afternoon. Two of the billies, Snow and Perky, were walked down the Tanfield bridlepath. When we got onto our land, we let them wander as they pleased. They spent most of their time eating grass but they did follow us around the whole field as we checked out the hedges!
Posted by Jonathan Wallace at 23:30 No comments:

The regulation of muck heaps 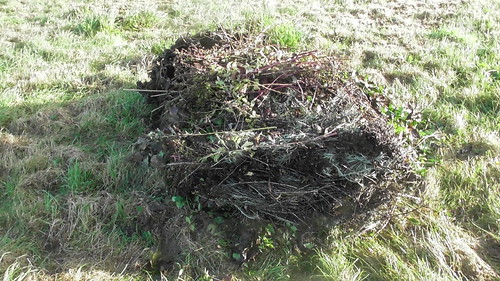 Things are starting to happen on our new small holding. We have now set up a compost and manure heap. We took a load of garden waste and goat muck in the land rover to the site. The location of the heap had to be carefully considered. There are DEFRA regulations on this matter - we can't just bung the heap anywhere. It has to be over 10 metres from a water course (we have a stream running down one side of our land) and over 50 metres from a bore hole or well (we have neither).

We found a suitable location. Our plan now is to move most of the material from the big compost heap on our Farside allotment to the small holding. That's going to take quite a few journeys.
Posted by Jonathan Wallace at 23:00 No comments: 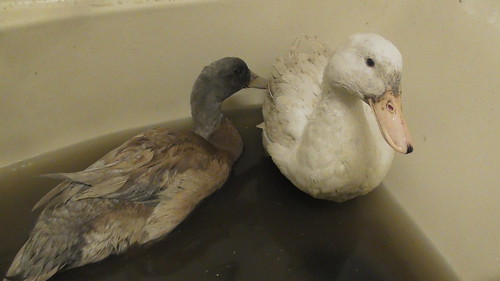 I brought back another two of our ducks tonight. Both were a bit muddy but not as much as the one we brought back over the weekend. One was looking a bit under the weather. Once both had finished in the bath, they had perked up, had a good preen and are both back in the box ready to return to the allotment tomorrow.
Posted by Jonathan Wallace at 22:10 No comments:

When the chips are down 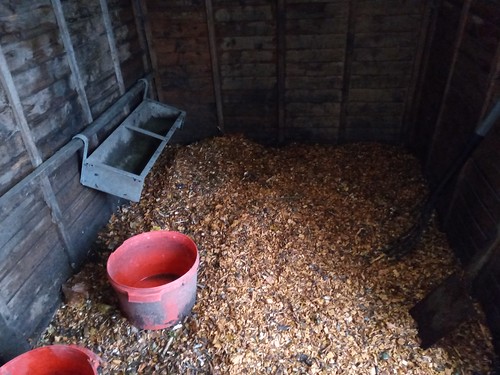 A local gardening business donated a lorry load of wood chippings to the Whinnies Community Garden last week. It was far more that they needed so they told me I could take as much as I wanted. I put five barrowloads into the goat house. This has worked rather well.
Posted by Jonathan Wallace at 10:04 No comments:

What to do with all those pumpkins: feed the goats 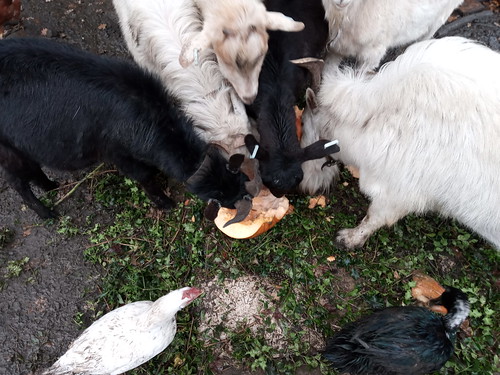 One of the gardeners in the Whinnies grew lots of pumpkins for Halloween. He had a number left over at the start of November so he swapped them with me for a few barrow of manure. One of them was a bit bruised so it got fed to the goats. They loved it! The issue now is what to do with all the other pumpkins. Watch out for soup, pie, curry, chutney recipes heading this way!
Posted by Jonathan Wallace at 11:52 No comments: 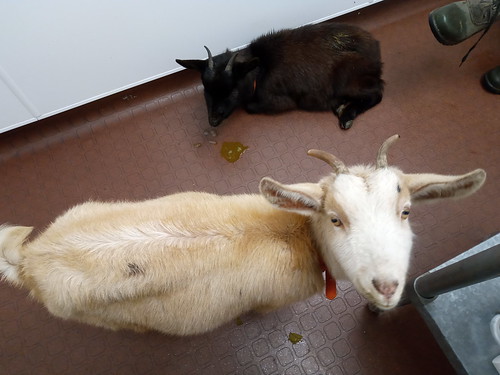 Last week was a setback for us - and especially for the goats. Sadly, we lost Danny, the little black kid who we hand raised earlier this year. Somehow, a bit of rhododendron had got into a batch of privet we fed them. It is very toxic and the smaller kids were clearly affected by it. On Monday last week, we took Danny and Sandy to the vet. It was an emergency trip in at 11pm. Sandy did not appear to be too badly affected so she was not given any medication. Danny however was clearly unwell and quite distressed. The vet did her best and gave her medication. She calmed down a bit.

On Tuesday, Gertie was under the weather in the morning but by the evening she seemed to be better. Even Danny was heating a bit. Wednesday morning however saw both Gertie and Danny vomiting. I decided to monitor them until the afternoon when it was obvious another trip to the vet was needed. 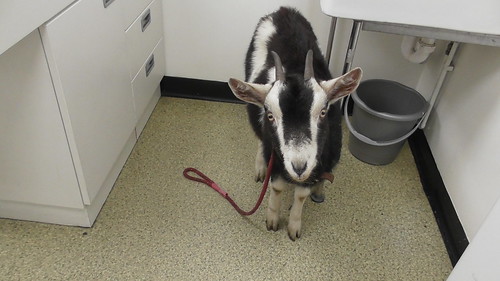 Our main concern was Danny but both were given medication by the vet. Back home Gertie seemed well enough to go back to the paddock with the other nannies. Danny however we kept at home. She had a bad night and in the morning it was clear we were losing her. I made the difficult decision to take her back to the vet to put her to sleep. She died on my lap on the way in.

It was a very upsetting experience but the good news is that Gertie and Sandy are fully recovered.
Posted by Jonathan Wallace at 22:52 No comments: 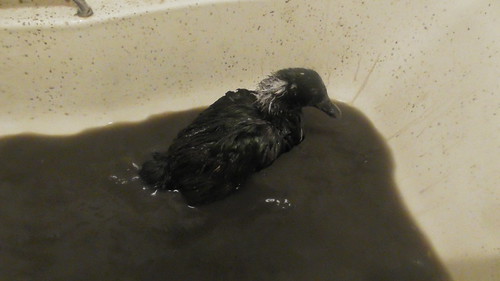 A few days ago I spotted that one of our drakes was looking very muddy and not very happy. Ducks and drakes usually keep their feathers in good order. They preen themselves constantly and secrete a saliva from their bills that waterproofs the feathers and keeps the bird in good health. The drake in question was probably overwhelmed by the amount of mud we have due to the exceptionally heavy rain recently.

I brought him back home and cleaned him in the bath. He particularly liked the shower! We managed to get rid of the mud and we have been keeping him in the cage in the back garden for a few days so that he can thoroughly preen himself and get his feathers back into good shape. This needs to be done before he is back in the mud on the allotment. He is now in good shape and tomorrow he goes back home. 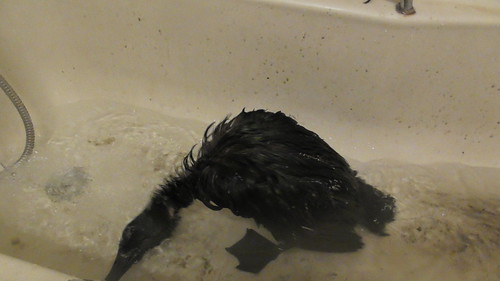 Posted by Jonathan Wallace at 22:13 No comments: 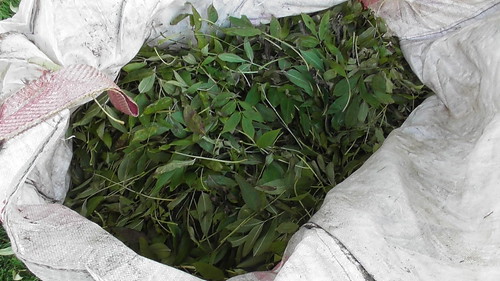 I spotted lots of ash leaves on the ground on the edge of Dunston recently. The leaves were still green so I raked up a dumpy bag full of them and fed them to the goats. They loved them!
Posted by Jonathan Wallace at 23:12 No comments: 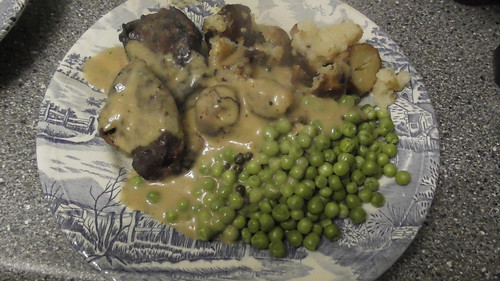 We had been given some wild ducks recently by a friend who goes shooting. We will pay for them with jars of jam and honey. A couple of days ago we grilled a couple of duck breasts. They went well with pepper sauce, potatoes and peas.
Posted by Jonathan Wallace at 23:04 No comments: 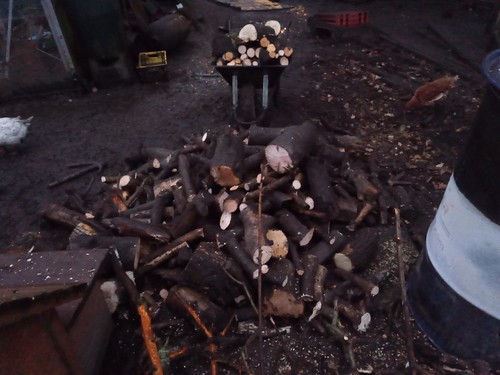 We had a large pile of logs and branches that had been chopped from trees and hedges over a year ago. Some were from storm-damaged trees. This afternoon we brought the chainsaw into use. The branches and logs have now been chopped into firewood though some of the thicker ones will need to be split. Now we know we won't be cold this winter! 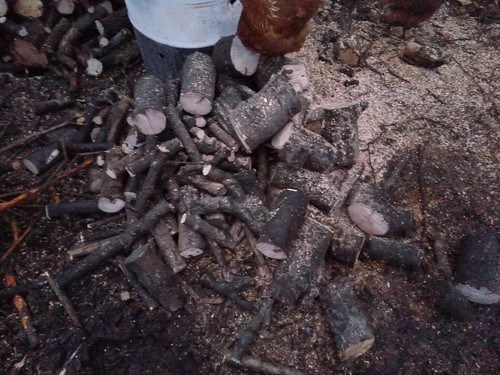 Posted by Jonathan Wallace at 19:21 No comments: