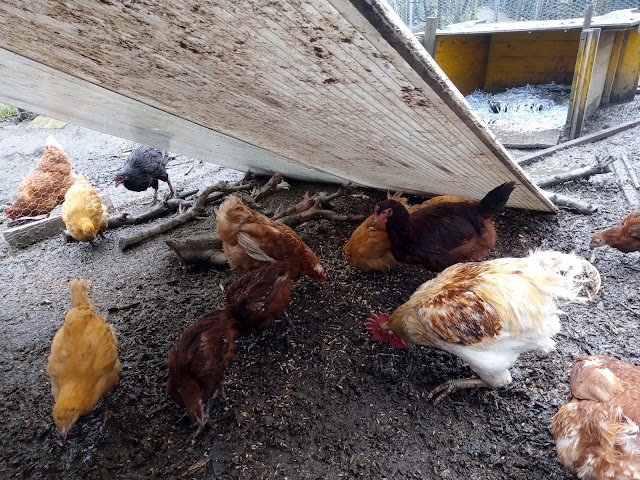 We have had lots of rain recently and this inevitably leads to lots of mud as the poultry churns up the ground so readily. In the chick run we have come up with a simple solution to keep the birds and the ground dry. We have made a lean to shelter from two transparent plastic roofing sheets. They work very effectively. 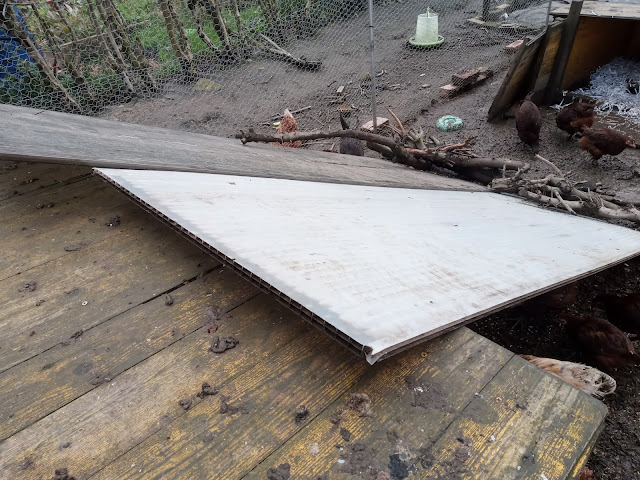 Posted by Jonathan Wallace at 23:54 No comments: 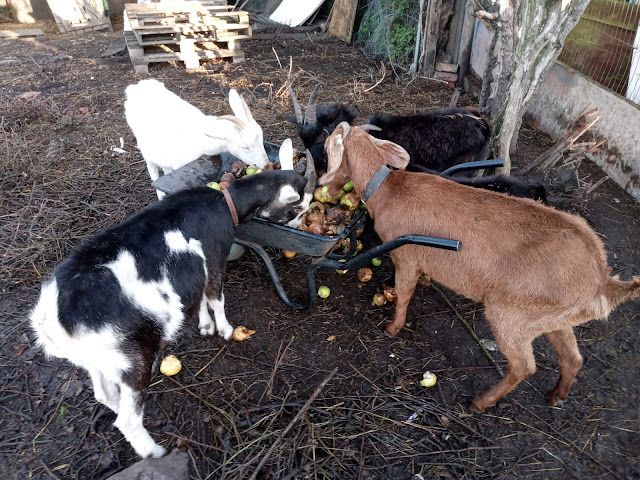 Over the past couple of weeks we have collected nearly a tonne of apples and pears grown in people's gardens locally. What we collected was surplus to requirements and most would have ended up in the garden waste bins if we hadn't collected them. We have started to feed the most bashed and damaged apples to the goats as they won't last long. The rest will go into storage over the winter to be used as goat food. Thanks to everyone who swapped their fruit for our preserves and in some cases simply gave us their fruit. It will all be used in a sustainable way. Nothing wasted! 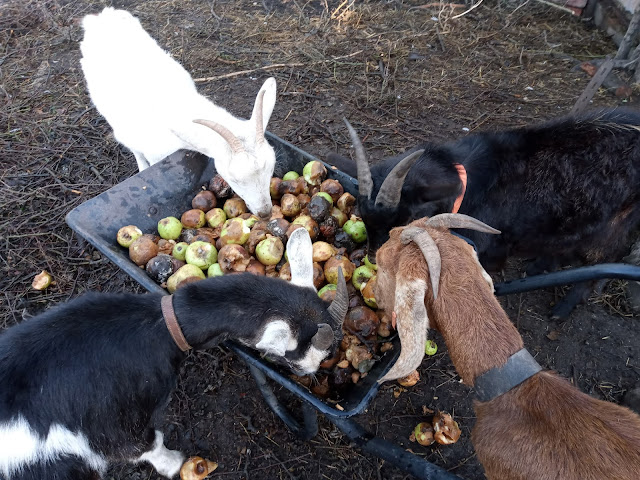 Posted by Jonathan Wallace at 12:27 No comments:

Starting to harvest the potatoes 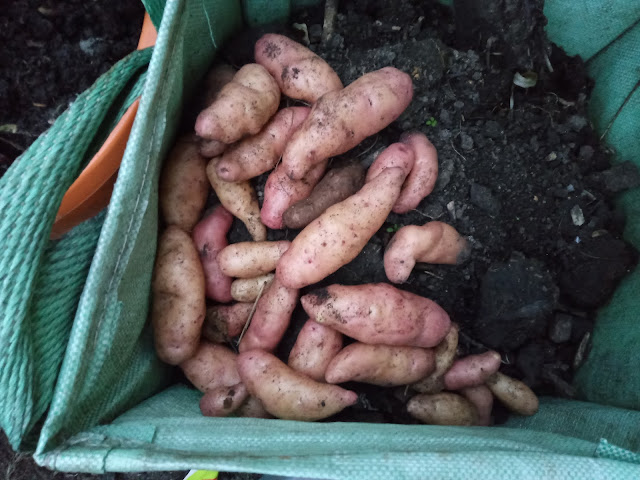 This year we planted our biggest potato crop yet. We were able to do this because we now have in our possession our main field. We also took the decision to turn half our drive into a potato patch using a stockpile of potato bags we have used on and off for years. So, this time we have much more space for potato growing. We have planted a number of varieties. The first to be picked is pink fur apple potatoes, a salad variety. Most are still in the potato bags (the PFA were grown on the drive) but we have sampled them and they are great!

Once we have sorted the storage of the half tonne of apples we've gathered from local residents for goat fodder over winter, we shall get the whole of the potato crop harvested.

Posted by Jonathan Wallace at 10:06 No comments: 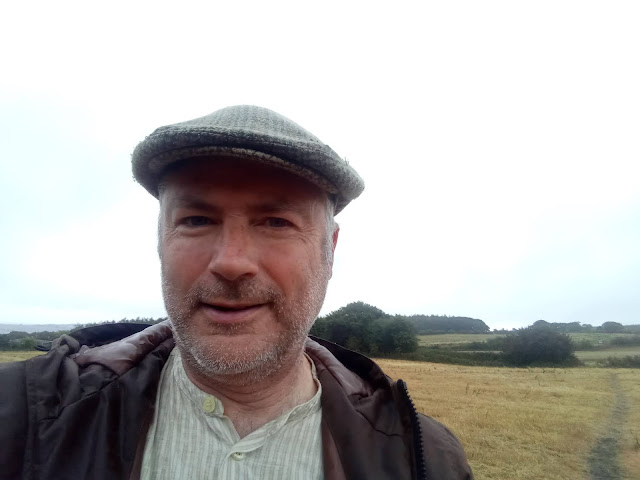 The weather today has been awful. It has rained nearly all day. Sadly, tomorrow is predicted for the same. This puts on hold some of the jobs that I have planned, particularly potato picking and blackberry gathering.

Posted by Jonathan Wallace at 23:28 No comments: 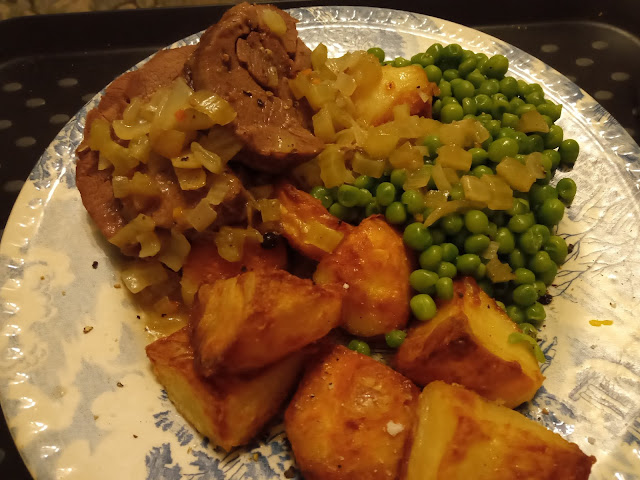 We have had another of the joints from the deer that was butchered last month. This is our second venison dinner this month. Excellent quality meat.

Posted by Jonathan Wallace at 23:23 No comments: 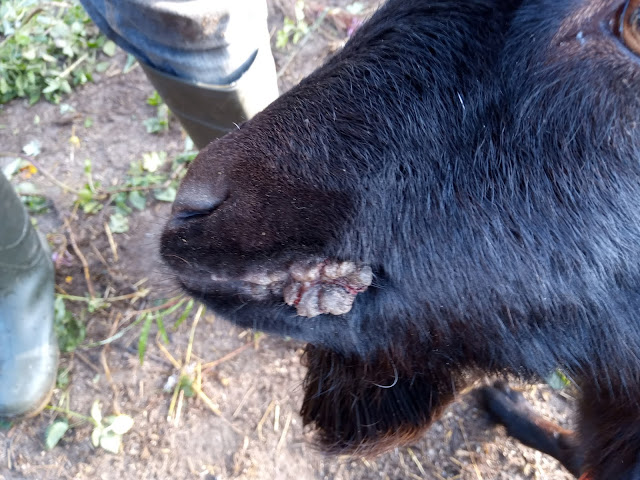 Last week I spotted scabs on the lip of Sooty, one of our goat kids. I had seen nothing like this before so I looked up possible causes. We are pretty certain he has orf virus. This causes mouth ulcers and scabs. We decided to isolate him so we have moved him to the secure paddock on the Farside plot. As goats are social animals, we put his sister Sweep in the paddock with him. The two are very close and Sooty would not have coped well without company.

He is making a good recovery. When I checked him today, there were fewer scabby lumps. He and Sweep however will remain in the paddock away from the other animals until he is fully recovered.

Posted by Jonathan Wallace at 00:05 No comments: 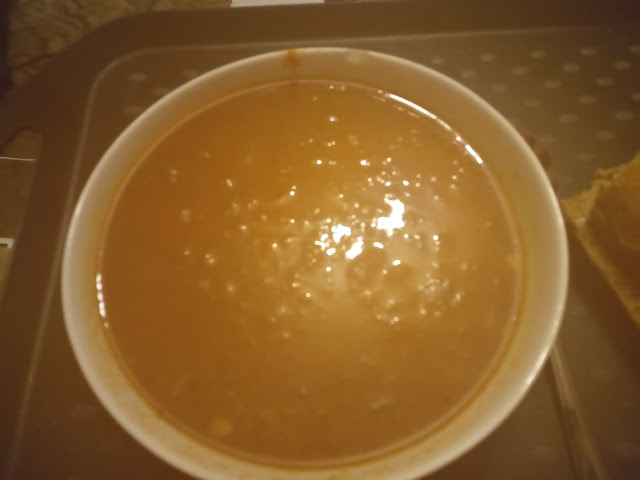 This soup was made from venison stock added to pigeon soup (which was made in such a huge quantity that we couldn't face another day of it, hence the reason for putting it in the freezer.) Combining the two meant we could free up freezer space and produce a different flavour of soup. It did us for two days' main meals.

Posted by Jonathan Wallace at 13:16 No comments: 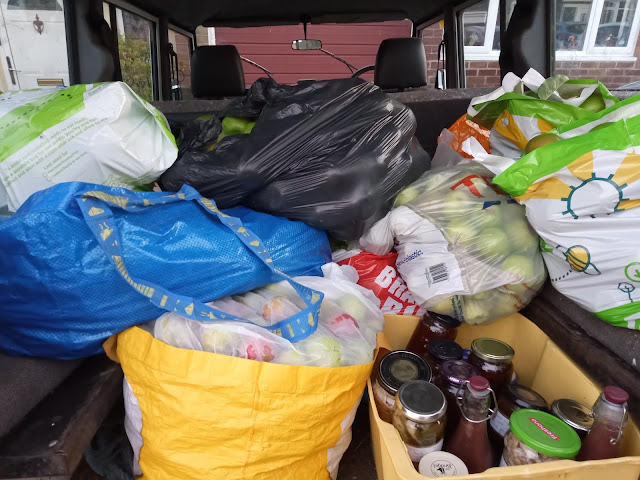 On Friday I posted on local Facebook sites that we wanted to swap our homemade preserves for people's surplus apples and pears. We explained that we needed them for fodder for the goats over the winter but we would also use some to make more preserves. The result was very encouraging: people with more apples and pears than they knew what to do with from trees in their gardens got in touch and I've spent much of the weekend visiting people to collect the surplus fruit. The Land Rover is now full! People were very happy to let us have the apples and pears just to avoid the waste.

We are still collecting surplus fruit - indeed tomorrow I will be making more calls. We also have more apples to collect from the tree on our Farside plot. We have 6 sacks already but there are still some apples on the tree. We will now sort the fruit and use up the bashed ones in preserve making. The rest will go into storage for the winter for the goats.

Posted by Jonathan Wallace at 19:45 No comments: 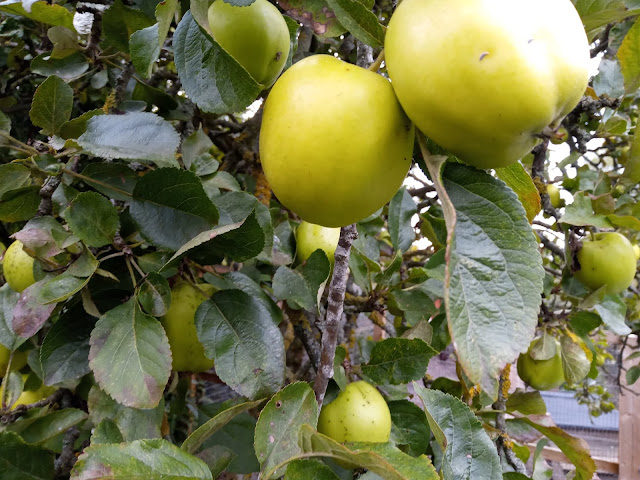 It looks like we are heading for a good apple crop this year. We've started to collect the apples from the large tree on our Farside plot. 5 sacks collected yesterday and lots still more to come. Most will be used over winter as feed for the goats but there will be ample opportunities to make pies and preserves. 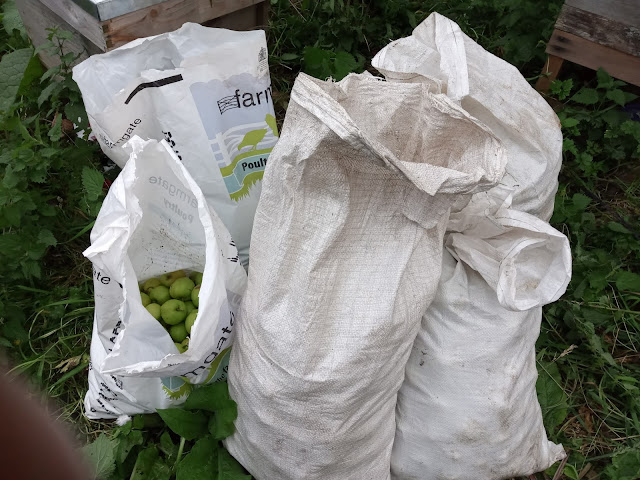 Posted by Jonathan Wallace at 12:43 No comments:

How to make rowan and gooseberry jelly

We had a big gooseberry crop this year, enough to allow us to experiment with creating new recipes for preserves. We have lots of rowan (mountain ash) growing near us. They produce bright red berries which are packed full of pectin, so any preserves set well. They have a bitter taste so I decided to combine them with gooseberries to make a jelly. The result was better than I expected. The video takes you through how I made it.

Posted by Jonathan Wallace at 10:46 No comments: 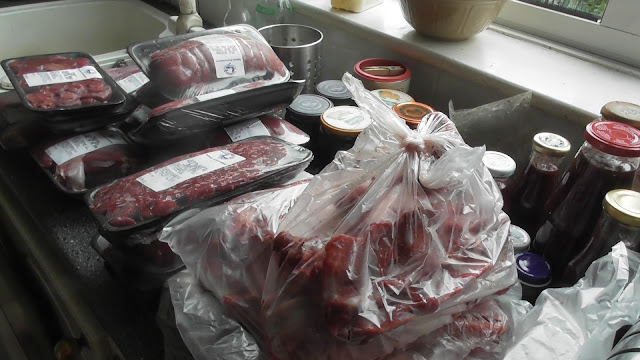 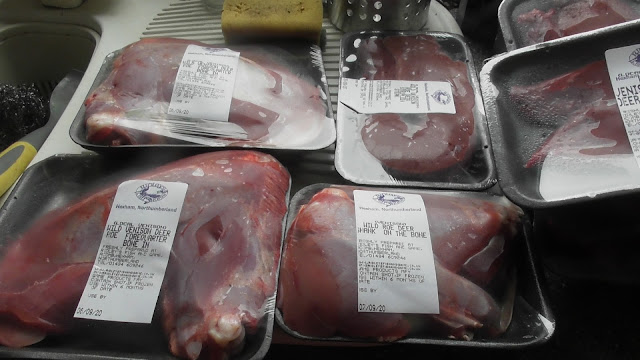 A couple of weeks ago we came across an injured deer near our smallholding. She had got caught up in a barbed wire fence next to a public footpath. She was still alive but there was a deep slash across her stomach. It was clear she wasn't going to survive. We removed her from the fence and made her as comfortable as we could. Phone calls to wildlife charities to get someone out to put her to sleep turned out to be unnecessary. She died an hour later.

We took the carcass home rather than leaving it to rot next to where people walk their dogs. We found a game butcher in Acomb near Hexham and booked them to butcher the carcass though we had to gut her first. We got the meat back last week, most of which has gone into one of our freezers. We passed a venison joint on to the friend who pointed us to the game butcher.

Expect us to post about venison dinners, game pies and game sausages over the coming months. 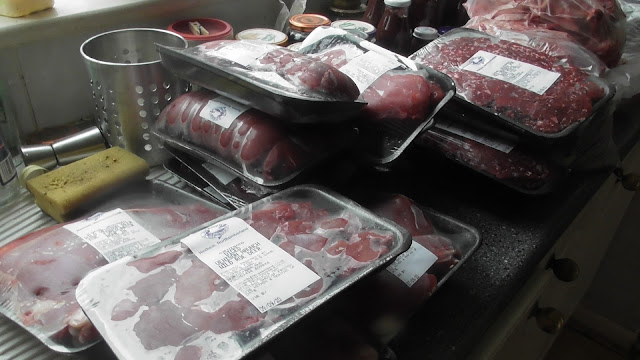 Posted by Jonathan Wallace at 12:24 No comments: 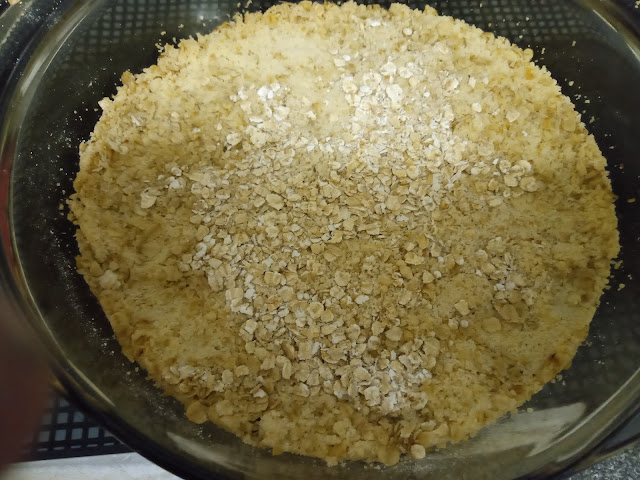 We have a modest 3rd crop of rhubarb still to harvest but in the absence of anything freshly picked, we had lots of rhubarb in one of our freezers. You can't beat a rhubarb crumble!

Posted by Jonathan Wallace at 00:15 No comments: 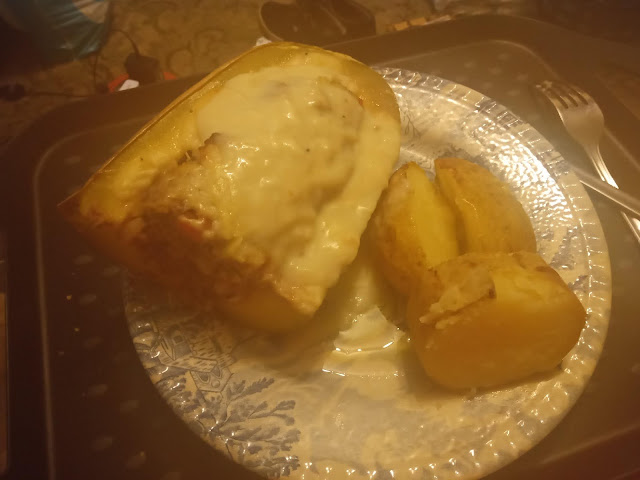 It's that time of year when are inundated with marrows. Some will be made into curries and into chutneys. But first, we stuffed one with pigeon meat and baked it. It was then topped with cheese sauce. We've been having it for the past couple of days with a dessert of trifle which includes an old sponge cake made some years ago using duck eggs. It had been in one of the freezers for years and was rediscovered when we defrosted the freezer over the weekend. 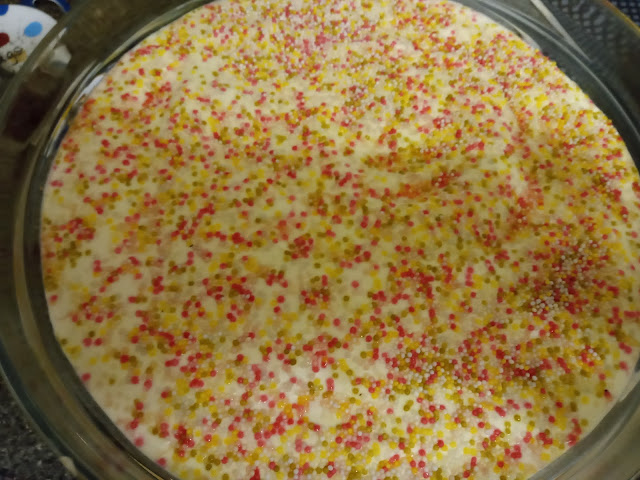 Posted by Jonathan Wallace at 23:02 No comments: 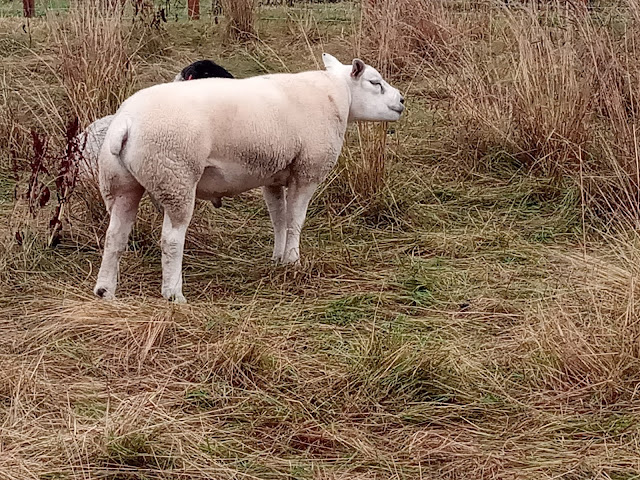 We have a new addition to our smallholding. This is Rex, a Texel ram which we bought last week. He is about 16 months old. He will service the 4 sheep we have - two of which are Texels. I'm looking forward to lamb next year!

Posted by Jonathan Wallace at 12:54 No comments: