There has been a break in the rain here, lasting 2 days. It ended this afternoon. David at least was able to get the potatoes planted, though he was mobbed by the hens who feasted on fat worms whilst he dug the ground. We have also built a shelter for the hens. They have been getting a bit bedraggled recently by the weather. They have found a semi-sheltered corner of the allotment but it is not ideal. The shelter is about 2 metres long and comes with its own perch. Only the best of luxury for our girls! Actually, the materials cost only £33, much cheaper than the £200 we saw quoted for a ready made shelter.

We carried the shelter over this afternoon and had to pass it over the hedge from the neighbouring allotment as it was too big to get through the gate. Alas, the hens took one look and ran off. I'll keep you informed if they decide to move in.
Posted by Jonathan Wallace at 17:43 No comments: 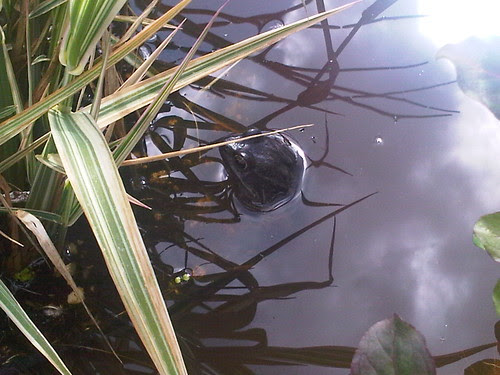 Last year we dug a pond. The aim is to encourage frogs onto the allotment. They eat bugs, slugs and snails. Might as well use nature to help control nature. Over the past couple of weeks we have had lots of rain and the pond was overflowing. When I checked it yesterday I discovered it full of life. I saw numerous newts and a couple of frogs. There are also lots of bugs swimming about. We are hoping to get some ducks soon so they will be using the pond as well.

Last year we had some frogs on the allotment. One large one lived in the greenhouse and a number of small ones took up residence in the polytunnel.

I snapped the photo of one of the frogs on my blackberry.
Posted by Jonathan Wallace at 19:48 No comments:

The amount of rain we are having at the moment is causing us some problems. Having experienced a heat wave in March, with the ground baked hard, now we have waterlogged soil and a great deal of mud. We have to let the hens out of the chicken run as that is just a mudbath. We have not been able to plant the potatoes as the ground is so wet and I am a bit worried that we are running out of time to get them in. In addition, the weather is stopping us from checking the hives. So stop the rain dancing everyone and give us just a couple of days of dry weather, please.
Posted by Jonathan Wallace at 11:57 5 comments:

An egg without a shell 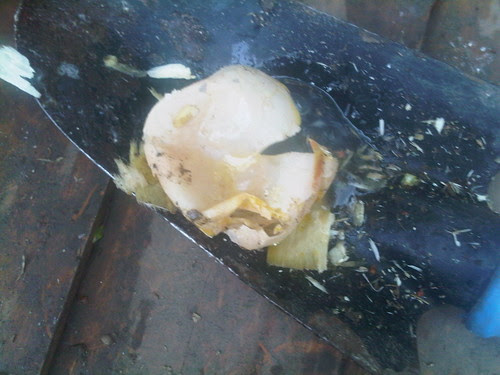 I'm not sure whether there is such a word as "shellless". If there isn't, one of my hens has invented it for me. A few days ago, one of our hens laid an egg without a shell. I took the above photo on my blackberry so it's not the best picture I have taken. My reckoning is that it was laid by one of the hens that has just started producing. Fortunately, there has been no repeat but had more shellless eggs been laid, we would have had to check their diet. Our hen books said it can be caused by a lack of grit though they had plenty in a bowl in the chicken run. The books also said that it is a problem if they regularly lay shellless eggs. We will keep an eye on the situation but I think we are in the clear now - we've cracked the problem!
Posted by Jonathan Wallace at 11:47 1 comment:

We have had a bit of a setback with our beehives. Two of them are strong but the 3rd one did not appear to be doing too well. The number of bees flying to and from it was falling and we did not see much pollen being brought in, which meant there was no brood which meant the queen was probably dead and not replaced. We checked out the hive and sure enough, there was no brood and no sign of a queen. We therefore took the decision to merge the hive with another as, at this time of year, no one would have a queen we could add to the hive.

The process took a few days to complete. The weak hive had to be moved gradually closer to the strong one. A sudden move would mean the bees flying back to where the hive previous was. They would then find no hive there but have no where to go.

Once the hives were side by side, we opened the strong one, placed a single sheet of newspaper over the frames and put the brood box containing all the bees from the old hive onto the newspaper. We then put the roof onto it. In the time it would take for the bees to eat their way through the paper, they would get used to the smell of each other. The bees from both hives would therefore not feel they were being invaded by another colony.

The result is that we now have a super strong hive and we will be looking to artificially swarm it to get a 3rd hive up and running later in the spring.
Posted by Jonathan Wallace at 23:28 5 comments: 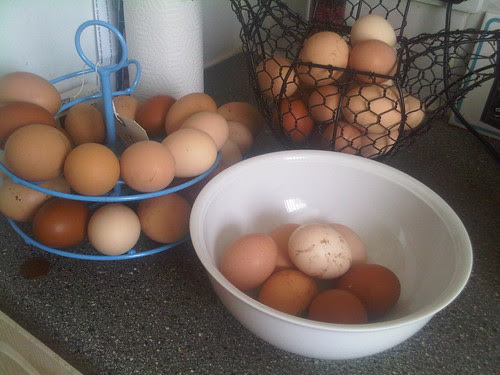 We got another 2 hens in January, bringing our total to 7. A few days ago, we knew all of them were laying when, for the first time, we got 7 eggs in one day. We now have a bit of an egg mountain back home. I will pickle some soon. Some will be given away or swapped. We have a family birthday party tomorrow so some will be given away then. I'm getting my hair cut this afternoon so my hairdresser will be given some as well. I've been looking through medieval recipes recently and saw some dishes which used a dozen eggs and a pint of cream. Obesity wasn't a problem then as they worked off the calories through heavy manual labour. Nevertheless, I may try one or two of these old recipes.

We have built a perch from some logs in the chicken run and I spotted 6 of the 7 hens on it recently. I snapped the following shot on my blackberry. 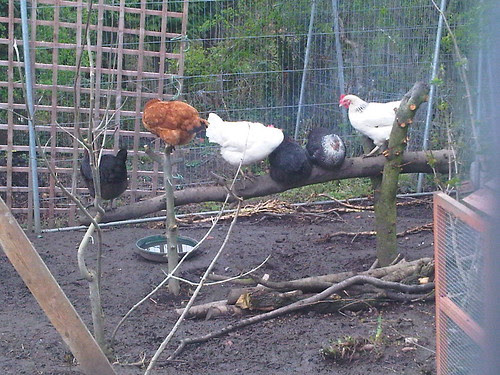