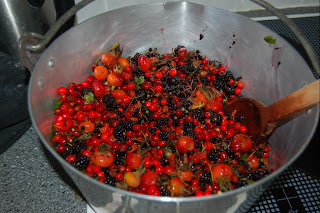 Hedgerows are an excellent source of fruits and berries in the autumn. There are a large number of different shrubs and trees that provide material for making hedgerow jelly. The following is my own recipe I used jelly I last week:

Your also need apple. I used the skins and cores of apples which were the waste product of other jam and pie making sessions. They were put into a bag and placed in the freezer until needed. I added more to the bag over time as they were produced. It's a useful way to use up a waste product. It is also useful to add some lemon, in the form of lemon skins. Again, as with the apple waste, simply accumulate lemon skins where you have squeezed the lemons for use in other recipes and freeze them as you go along. 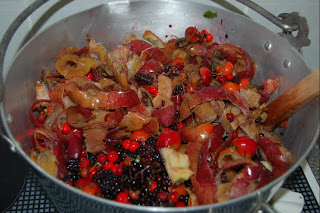 So, once you have all your berries, put them into the jam pan with the apple and lemon. Cover with water and heat, bringing to the boil. Keep the whole lot simmering for a couple of hours. Fruits such as haws and rosehips can be quite dry so you may need to add some water whilst it is simmering away. I did a couple of times. 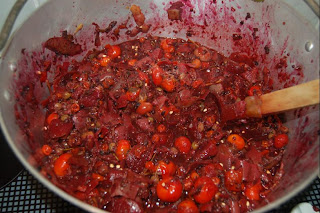 Once it has had a good boil through, strain it through a muslin bag overnight. If you found the pulp was too dry and you didn't get much liquid off it first time, put it back in the pan and reboil with more water, and then restrain. Measure out the liquid after you have finished straining it.

Put the liquid into the jam pan and heat til it boils. Turn down the heat but keep it simmering. Add sugar - one kg per litre of liquid. Keep stirring until the boiling point is reached, then put into warmed jars. The proportion of different fruits and berries can vary. The more soft fruit like blackberries and elderberries used, the less water you need to add at the start. And vica versa.

If you add substantially more rowan, you may need to increase the amount of sugar. Rowan is very bitter and makes a good jelly on its own (it has more pectin than you can shake a stick at.) Other fruits can be used as well. I had planned to put in sloes but the crop was a failure this year. 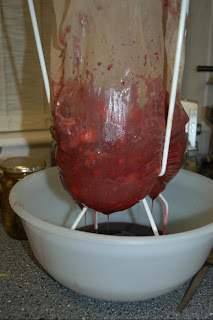 This jelly is good for spreading on bread and toast.

I did try to press the resulting pulp through a sieve to make a fruit cheese but rapidy gave up. So much of it was pips and stones that I was rapidly onto a time wasting losing battle. So it went into the compost bin instead.

Posted by Jonathan Wallace at 13:54

Hi I just made a version of your hedgerow jelly today. I made tons of apple jelly a couple of weeks ago, then I wanted to make one more thing before the end of Autumn. Your combination of ingredients was ideal. I found most near my workplace, and a rowan tree at the end of my road! Thanks for the post.