My confession is that before the weekend, I had never made hawberry ketchup. That gap in my culinary experience has now been filled. On Saturday I had a bottle of hawberry ketchup and made another 4 yesterday (Saturday was also the rehearsal for the video - see below).

Hawthorn is one of our most common hedgerow trees. In the spring it is covered in white flowers. In the autumn it sags under the eight of bunches of small, bright red berries which are great for making jellies and, in this instance, ketchup. Hawberry ketchup has a fruity but sweet and sour taste to it. It's great to eat and easy to make. The abundance of the berries makes it a good one to try for the occasional food forager. 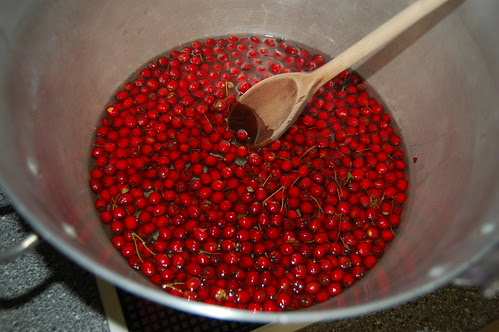 Bring to the boil then simmer until all the berries have broken up and pulped. This takes at least half an hour.

Use a potato masher to break up the pulp ever more then press it through a sieve. Throw the stalks, skin and pips into the compost bin and then return the puree to the (now cleaned) pan.

Reheat the pan and stir in about 160-180g of sugar. Add about a half to whole teaspoon of salt and then ground black pepper to taste. At this stage if you want to, add in some spices. I added a splash of cayenne pepper.

Bring back to boil and simmer for around 5 minutes, then add to sterilised bottles.

This stuff can keep for about a year but once opened, it's best to keep in the fridge. All the books etc I have read say it is good with cold meats. I used mine as a dip for cheese which was pleasant. 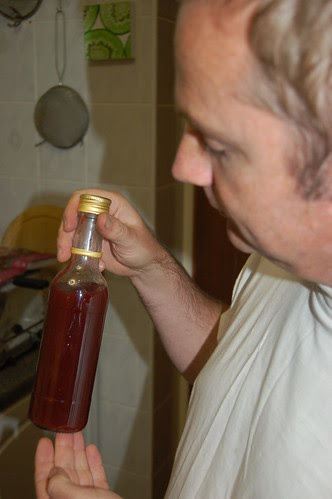 Note the rather pleasant colour to it. Anyway, here's the video we filmed on how to make hawberry ketchup:

The recipe we used is based on the one in the River Cottage Handbook No. 2 on Preserves by Pam Corbin with an introduction by Hugh Fearnley-Whittinstall (who else!?)
Posted by Jonathan Wallace at 23:31

Thanks for the recipe! I now have homemade hawberry ketchup :-)