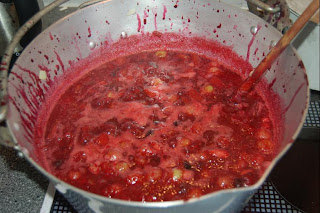 We didn't just use the wild cherries for making vodka on Sunday. I also made some cherry chutney. Actually, it was more than just cherries that went into it. I had a bag of rhubarb from the allotment to use us and a bag of gooseberries. This one comes up a lovely red colour (see above) whilst cooking, but darkens whilst it brews in the jars.
So here goes, cherry, rhubarb and gooseberry chutney recipe (all from the allotment or picked wild):
1 kg rhubarb
1kg wild cherries
1 kg gooseberries
250cl red wine vinegar
400 grammes raisins
800 grammes brown sugar
one onion (preferably from the allotment)
2 teaspoons all spice
cinnamon bark
4 star anise
Chop the rhubarb and onion and add to jam pan.
Stone the cherries (a boring job but it has to be done!) and add to the jam pan with the gooseberries and raisins.
Add the cinnamon and star anise.
Put some heat under the pan and pour in the vinegar.
Add the all spice.
Bring to boil and add the sugar. Keep the heat under the pan until the liquid has boiled off. This takes at least an hour (and given the quantity I made, a great deal more than an hour). Cherries and gooseberries are soft fruit so produce a lot of liquid. You have been warned! Keep stirring.
Once the liquid has boiled off, remove the cinnamon and star anise and then put into jars. Leave to stand for at least a month before using.
This is definitely one to be eaten with cheese or cold meats. 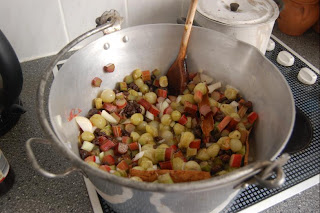 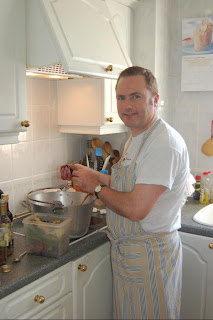 The boring bit - stoning the cherries!

Posted by Jonathan Wallace at 19:13

i'm going to try this later, but without the cherries or raisans.