When I visited Poland in 1995, we discovered cherry vodka! We had always wanted to make it ourselves so on Sunday we gave it a go. I picked 2kg of wild cherries on Sunday and used half to make into cherry vodka. As a result, we were cleared out of vodka so I didn't get my bloody mary I sometimes have on a Sunday evening.

Nevertheless, here's the recipe we followed for cherry vodka (we made two lots of the following):

Add the sugar and cherries to a picking jar.

Pour in the vodka.

Seal the jar and shake (not all the sugar dissolves immediately)

Leave to stand for three months, giving it an occasional shake.

You can then bottle it or just leave it in the jars. If you do bottle it, put the cherries on some ice cream and enjoy, but don't drive the car for 24 hours afterwards!

This is a drink to have neat. 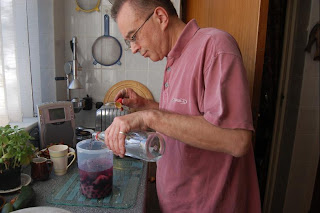 Above: David pours in the vodka. Below, the charry colour quickly infuses into the vodka. 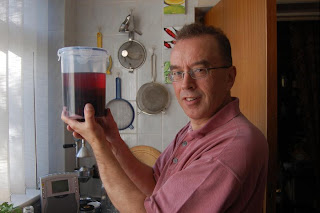 Posted by Jonathan Wallace at 18:54

I know this post is old but did you enjoy the cherry vodka? We do this each year and absolutely love it - though it is a bit strong!

I'm looking forward to this year's cherry harvest as I hope to make much more than last year (the harvest was very poor due to flooding).